How is this man still alive? 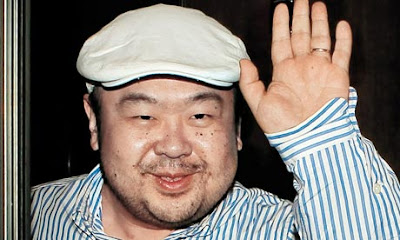 I was one of the first to cast doubts on what kind of grip on power — if any — Kim Jong-un would have in North Korea once his father kicked the bucket. In the past I have referred to him as The Kim Who Wasn't There, suggesting that whatever coronation the Western media (including South Korea and Japan) were bestowing on him was premature: his power was inchoate and his ascension was cosmetic if not wholly imaginary.

In the wake of his father's death, his sudden rise and ubiquity in North Korean media smells to me like a scramble to put him in place for the sake of continuity, a quickie act of convenience for everyone involved, but I would bet dollars to malasadas that whatever faction is supporting him has a tenuous hold at best. The Incas may well have been talking about the Kim Dynasty when they had their calendar ending in 2012.

Um, anyway, the reason for this post, other than to sum up the current evolution of my Nork Dynasty Denial, is that Kim Jongun's hyŏng Kim Jongnam seems to agree with me.

From the Christian Science Monitor, which is not Christian, not science, nor any kind of lizard:


Kim’s oldest brother, Kim Jong-Nam, living in the gambling enclave of Macao on the southeastern coast of China, hinted at the lack of confidence behind the campaign to glorify the new leader, according to a Japanese newspaper.

Rejected by his father as a successor more than 10 years ago, Kim Jong-nam reportedly talked about the buildup of his brother while expressing misgivings. Mr. Kim reportedly told the Tokyo Shimbun in an e-mail that he expected “the existing ruling elite to follow in the footsteps of my father while keeping the young successor as a symbolic figure."

It was “difficult,” he was quoted as saying in a burst of frankness that he has displayed in earlier encounters with the Japanese media, “to accept a third-generation succession under normal reasoning."

Kim Jong-nam was quoted in a newly published book by Japanese journalist Yoji Gomi as having been still more critical. In the book, entitled "My father Kim Jong-Il and Me," he said, "North Korea is very unstable" and "the power of the military has become too strong." Jong-nam, communicating in Korean by e-mail and in interviews with Mr. Gomi last year, is quoted as saying, "If the succession ends in failure, the military will wield the real power for sure."

That perspective from a close but clearly disillusioned relative jibes with the views of foreign analysts who wonder how long Kim Jong-un can last – or whether he can possibly take charge of his own destiny and that of his people.

Funny how "the views of foreign analysts" are only now catching up with what I'd been saying on this blog back in 2010 (and yeah, I know that some of them were reading it, too).

Anyway, Kim Jongnam must have cojones the size of beach balls, because he seems unable to resist poking the Pyongyang power elite in the eye. I hope the guy stays out of trouble, because I see a role for him in the future as either (a) an adviser to his little brother who may really want to change things in the DPRK or (b) a pragmatic figure who can step in and be a bridge from the past to the future if things start getting unstable. Call me a perpetual optimist.

Email ThisBlogThis!Share to TwitterShare to FacebookShare to Pinterest
Labels: Kim Jong-nam, The Kim Who Wasn't There™