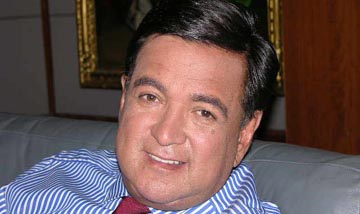 New Mexico Governor Bill Richardson is heading for the DPRK (not that this is a surprise):


Richardson, who spoke to CNN Thursday at a layover in Beijing as he waited to fly to Pyongyang, North Korea, said he hopes he can help the situation even if it is just "a little bit."

Richardson said he will try to get "North Koreans to curtail their aggressive behavior, to see if there is some basis for negotiations, to get them to stop the uranium enrichment."
Richardson, who has hosted a North Korean delegation in New Mexico in the past, said he hopes his past relationships will help.

The governor said he was invited to the nation by North Korea's senior nuclear negotiator Kim Gye Gwan and the meeting comes at a very pivotal time.

Tensions are "the highest I've ever seen. I've been involved with North Korea for the last 10 to 15 years," Richardson said. "I can't remember when the tension were as high as it is now. And you worry about some kind of action hastening a potential war. And we have to avoid that at all costs."

He's apparently a favorite conduit for Pyongyang — I originally assumed he'd be sent to North Korea to fish out Laura Ling and Euna Lee — but at the same time he's not a bagman for them either (I hope that hasn't changed — the "must avoid at all costs" line always makes me nervous).

In other words, he does a better job at letting Washington know what Pyongyang wants without really compromising Washington (or Seoul). At least that's my take (and I actually voted for the guy in 2008).