An official portrait of Kim Jong-un? 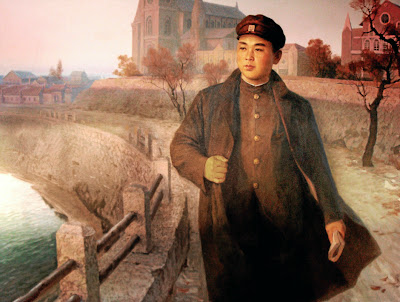 Mark MacKinnon of The Globe and Mail of Canada suggests this untitled portraint spotted in a Rajin museum by a Canadian tourist might be just that, in which it case it is a sign of the Kim Jong-un cult gaining traction. That we're seeing a Kim Jong-un portrait seems to be supported by a few notable names in the North Korea Watching industry. [HT to OFK commenter jason bastrop]:


If it is him, and a majority of the experts consulted by The Globe and Mail believe that it is, the portrait marks the first glimpse anyone outside North Korea has had of how the regime will sell Kim Jong-un to a people conditioned to believe his father is their infallible Dear Leader and his grandfather, Kim Il-sung, an immortal who remains president despite his death in 1994.

It would be laughable, perhaps, if the new propaganda campaign weren’t accompanied by new military recklessness – including last month’s deadly shelling of a South Korean island – intended to give Kim Jong-un, already praised as “the Young General,” victories to claim as his own. [Kushibo's note: I again emphasize my skepticism that there is much "praise" being put on Kim Jong-un at all]

Out of half a dozen North Korea scholars who were sent a copy of the portrait, only one disagreed that the subject was likely Kim Jong-un. The other experts saw it as the launch of a massive propaganda campaign that will attempt to portray the heir apparent as having been sent abroad to learn foreign ways and technologies, while always keeping North Korea and its people in his heart.

Several who saw the portrait noted the physical resemblance (though the heir apparent is much flabbier in recent television footage), as well as a background that looks to be Interlaken, Switzerland, where Kim Jong-un is known to have spent time while studying at the International School of Berne in the late 1990s.

“It’s big news,” said Brian Myers, an expert on North Korea at Dongseo University in South Korea. “It’s hard to be completely certain on the basis of an untitled image alone. … But I cannot imagine a schoolboy outside the Kim family meriting this kind of painting, and it is very similar in mood and layout to depictions of the young Kim Il-sung and the young Kim Jong-il. So I would assume that it is Kim Jong-un although it is not a particularly striking likeness in view of the Kim Jong-un we have seen photographed in the past few months.”

Me? I don't think so (and I see I'm in good company with the likes of Professor Andrei Lankov, the one holdout whom The Globe and Mail interviewed).

And I think folks like Brian Myers — if he really was just shy of "completely certain" and that's not Mr MacKinnon putting enthusiasm in his mouth — ought to rethink where they're sitting on this bandwagon, lest their reputation be sullied by a major fail (and let's face it, Brian Myers has only one set of lenses when it comes to interpreting what's going on in North Korea, one I find wanting when it comes to explaining or predicting a lot of what goes on up there, so there's not a lot of margin for error... sometimes it seems you're only as good as your last success in this business).

In fact, I think that, like so much other "news" about Kim Jong-un's rise to power (read: unsupported speculation and journalistic pipe-dreaming), I think this is uninformed conjecture to fill a void of real information. The kind of void where a Canadian tourist visiting a museum in North Korea probably with display markers in a language he/she doesn't understand can set tongues wagging.

The style of school uniform, especially the hat, is reminiscent of the Japanese colonial era in which Kim Ilsung grew up (the Japanese annexed Korea in 1910 and he was born two years later). And while I have no idea what churches look like in Switzerland, the style of the church in the background here is quite similar to small-foundation brick-and-mortar Christian houses of worship in Korea (both Protestant and Catholic). Pyongyang was, before the Communists took over, known as "the Jerusalem of the East," and Kim Ilsung's own grandfather was a Presbyterian minister and his father a church elder.

The stone work and the railing along the river walk is also found in Korea. And the upward flare of the eaves (is that the right word?) on the house in the background appear more Korean than Swiss.

And think about it: When North Korea has not even acknowledged that Kim Jong-un was educated in the West, why would they glorify it in a painting?

I'll bet if I had a little more time I could find an authorized North Korean portrait of Kim Ilsung as a student dressed not unlike that. In the meantime, note the facial similarity with the Kim Ilsung (checking the door) below. 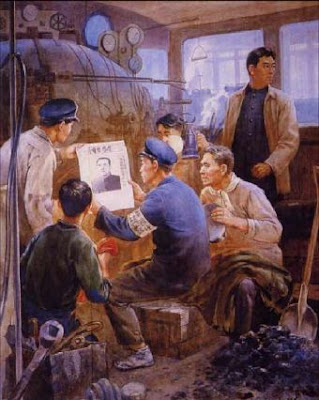