Maybe Santa just thought he was naughty this year

Open Radio for North Korea is reporting that a train full of gifts intended for Kim Jong-un, the heir apparent to Kim Jong-il, was derailed near the Chinese-North Korean border.

According to the Toronto Sun:


A train packed with birthday gifts for North Korea's leader-in-waiting Kim Jong-un derailed this month in a possible act of sabotage, a Seoul-based radio station which broadcasts across the border reported on Monday.

Open Radio for North Korea, a non-profit station which often cites sources in the reclusive, impoverished North, said the train laden with gifts including televisions and watches came off the rails on Dec. 11 near North Korea's border with China.

"The security service has been in an emergency situation because a train departing Sinuiju and headed for Pyongyang derailed on Dec. 11," the radio station quoted a source in the security service in North Phyongan province as saying.

The city of Sinuiju is a North Korean trading gateway.

"The tracks and rail beds are so old it is possible there was decay in the wood or nails that secured the tracks could have been dislodged but the extent of damage to the tracks and the timing of the incident points to a chance that someone intentionally damaged the tracks," the source said.

"It's highly likely that it was someone who is opposed to succession to Kim Jong-un," the source said, according to the radio station.

Now I've gone on record stating that I think the Western media (to include some elements of the South Korean and Japanese media) have made the ascension of Kim Jong-un to replace his father seem like it's much further along and more of a done deal than it actually is. In particular, we frequently read reports of how much he is praised by the North Korean media when in fact they hardly mention him, and when they do, it's as part of a list of "also present" people.

So what would that mean if Kim Jong-un's train (or a train carrying his gifts) really were derailed? Well, leaving aside the possibility that someone is reporting rumors or embellishing a story of an actual derailment to the point that it becomes mostly fictitious, it is possible that forces within or without North Korea are actively working to undermine the succession if not the regime itself.

A group within the Pyongyang regime opposed to yet another handover of power to yet another incompetent heir might be behind this, while a group of anti-Pyongyang saboteurs supported by outside forces (the South Korean government, ROK marines gone rogue, a network of militant NGOs deciding that tomorrow can't wait) might also see this as a great symbol to take down. 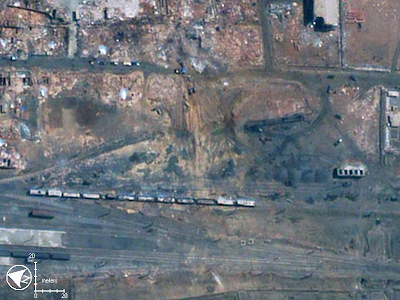 Let's not forget that this is the area and mode of transport that was apparently used for a targeted assassination of the Dear Leader a few years ago (note the explosion above, in Ryongchŏn). But let's not also forget that much of North Korea's infrastructure is decaying, and even train ties in the cold North can fall apart, after which people offered money to speculate then concoct a story that it was all supposed to happen that way, and it was full of gifts. That to me is the most likely scenario, but I wouldn't rule out something much, much bigger going on. T'is the season for anything goes.

UPDATE:
In relation to story #2 found here, the video mocking this incident that hackers put up on the official North Korean YouTube site can be found here.