Midnight mass at Honolulu's
Cathedral of Our Lady of Peace 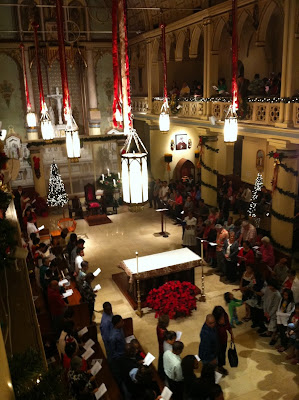 Instead of a local church, it was decided we should go downtown to Honolulu's Cathedral of Our Lady of Peace. Apparently a lot of people had gotten there earlier to enjoy Christmas carols, and that meant we were forced into the nosebleed seats. Many of those who got there before us were Christmas-and-Easter Christians, so it was packed.

The upper floors were actually a better way to view this church built in 1864. And they still brought us crackers and wine for the eucharist. At 1 a.m., though, I didn't feel entirely comfortable walking back to the car, which was on a deserted street that during the daytime would be bustling with activity.


On the day part of Christmas Day, I might take a cue from "Christmastime for the Jews" (the above video) and have dim sum in Chinatown. After that, I'll take in a movie (which is a Christmas tradition in the Kushibo abode).

Ah, what the heck... Let's throw in some Schweddy Balls:

And while we're at it, Happy Chanukah. That's both a three-weeks-late greeting for this year, and a fifty-two-week-early greeting for next year, when the holiday will actually run through Christmas like it should.

Finally, for some of homegrown Christmas satire from the K-blogosphere, check out ChickenHead's "T'was the Night Before Christmas on the DMZ."