Pets left on Yŏnpyŏng-do being tended by animal welfare groups 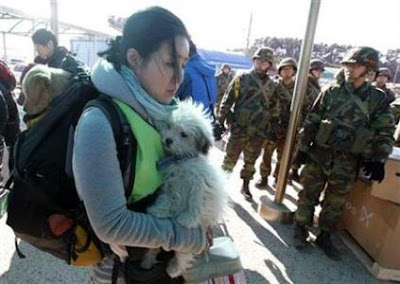 I thought this Reuters story was kinda touching:


Hungry dogs and cats roaming the streets of the remote South Korean island shelled by North Korea last week, some of them injured, are being fed and tended to by animal welfare groups. ...

Most of the 1,600 residents of mountainous Yeonpyeong have fled, leaving their pets behind, but animal welfare groups have taken them food and administered first aid.

"We also saved dogs with broken legs and little dogs attacked by other stray dogs."

Television footage showed a dog snapping eagerly at food on a street scattered with shattered glass and lined with damaged buildings. Others ate from bowls set inside doghouses.

Island residents said there were an estimated 200 dogs and cats on the island. Animal welfare workers said they had helped about 50 dogs and 10 cats so far.

"If you abandon dogs, and they produce puppies without peoples' care, they will become wild dogs. Then you will have to cope with a social problem with many stray dogs all around Yeonpyeong," said Jo Hee-kyong, head of the Korean Society for Animal Freedom.

While I have no doubt that some of the dogs on Yŏnpyŏng-do are poorly treated by North American standards (e.g., tied on short leashes, not getting out to walk, or even whacked on the head occasionally by inconsiderate owners), there has been a sea change in terms of attitudes toward pets. The fact that they're trying to rescue cats underscores that very point (not only because the animal rights folks are concerned about cats, but especially that there are people on the island who own them — the traditional folklore about cats sucking up the souls of recently departed people made them to freaky for most people to keep as pets up until recently).