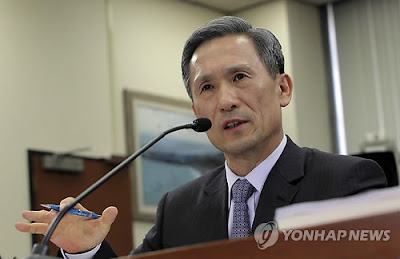 The latest tough-talker in the talking tough parade is Kim Kwanjin, the Minister of Defense-designate, talking tough at his parliamentary confirmation hearings.

The tough words came as Lee's government suffered intense criticism that the response to the North's Nov. 23 shelling on a South Korean island was weak, and over a stunning revelation that the South's spy chief dismissed information in August indicating North Korea might attack the front-line island.

Lee's nominee, Kim Kwan-jin, told a parliamentary confirmation hearing that North Korean aggression will result in airstrikes. He said South Korea will use all its combat capabilities to retaliate.

"In case the enemy attacks our territory and people again, we will thoroughly retaliate to ensure that the enemy cannot provoke again," Kim said. The hearing is a formality as South Korea's National Assembly does not have the power to reject Lee's appointment.

Yeah, I'll believe it when I see it. Such talk is dangerously cheap, and apparently very easy to come by. Why, take a look at what was said in December last year, months before the Ch'ŏnan was sunk and Yŏnpyŏng-do [Yeonpyeong] was shelled:


Tensions have remained high in the Yellow Sea since a brief but intense gunfight on November 10 left a North Korean patrol boat in flames. There were deadly naval gunbattles there in 1999 and 2002.

The South's navy expressed regret at its neighbour's announcement [that North Korea would open fire in the "disputed" waters south of the NLL] and pledged it would "sternly" handle any provocations.

"We express grave concern as the threat ... raises unnecessary tension between the Koreas," a statement said late Monday.

"Our military is fully prepared to protect the NLL and it will sternly respond to North Korea's provocations."

Is "thoroughly retaliate" the new "sternly respond"? We're only encouraging further escalation if we talk tough but do nothing.

The link from last year is from the December 22, 2010, Daily Kor, which fell on National Haiku Day, so all the day's headlines were in haiku form. This was the headline from that story:


To the NLL
sails the dauntless ROK* Navy
Defend it, they shall
* pronounced "rock" for that perfect 5-7-5 structure
Inspired by this very Zen-like circular repetition of the events of the world, here's a haiku for today: