Good news for President Obama, President Lee, most folks in South Korea, loads of folks in the United States, and me (and probably you, too).

From AP, via WaPo:


The U.S. and South Korea have reached an agreement on a free trade deal sought by the Obama administration to boost American exports and create tens of thousands of U.S. jobs in the largest trade pact in more than a decade.

Negotiators reached a deal on outstanding issues related to the automobile industry, which have been a sticking point in the talks, said a person close to the discussions. The person spoke on condition of anonymity in advance of an official White House announcement.

The "chicken tax" (the US's anachronistic 25% tariff on imported pickup trucks) still stands, and that could mean no Bongo trucks in Middle America, while the streets of Seoul will be filled with Hillbilly Hummers (aka, the Ford F150). Yee ha, indeed.

And of course, this doesn't mean we're out of the woods yet. While Obama will probably have little real problem getting the FTA through a Republican-dominated House of Representatives and a barely Democratic-controlled Senate, President Lee will face the full force of the chinboistas and maybe the dung-flinging farmers (who are not entirely chinboista-sympathetic) when he tries to get it through the National Assembly. After all, their voice is their only veto.

This could get as big as the Mad Cow candlelight madness of 2008. Expect it to get at least as ugly as the protests against the Chile-Korea FTA (which often saw more farmers than chinboista). 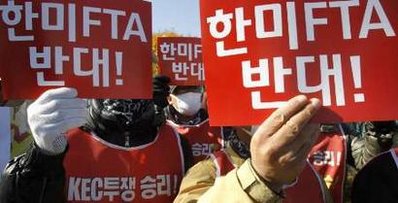 More on the FTA agreement having been reached over at The Marmot's Hole, where a lively discussion will no doubt ensue.