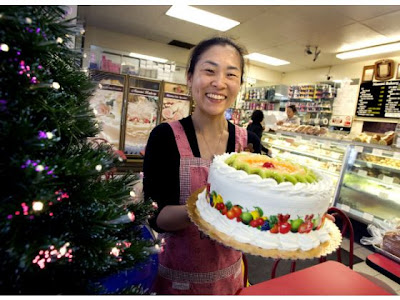 Okay. Obviously Kushibo did not get a sophisticated sense of humor for Christmas. But the National Fruitcake Day angle has an interesting twist to it: Korean bakers are introducing Korean-style fruitcake into the mix of doorstop-like blocks of dried fruit in a heavy cake.


There are at least two options for your Fruitcake Day festivities, and they both landed on our shore in 1985.

Your first option is for those of us (OK, the majority of people) who don't dig the sticky several-pound mass of dried fruit and nuts bought in round tins printed with holiday pictures.

Friends, we give you the Korean fruit cake, a delightful dish of sponge cake, custard and fresh fruit, layered up on a platter and covered with whipped crème. It's like the gussied-up, grown-up version of strawberry shortcake, with the addition of pineapple, kiwi and mandarin oranges.

At the Manmi Bakery in Garden Grove, Anna Yi sells two sizes, at $18 or $25. The cake is not specifically designed for Christmas, but rather for special occasions, like birthdays, she said.

"Each store has different kinds," Yi said. "Ours is more like an American-style. Other bakeries have a French style."

The French style has more fruit inside, but just a bit of fruit on the top of the cake, looking more like a Western-style cake, she said.

The cakes are not traditionally Korean, said Sejung Kim, assistant director of the UCLA Center for Korean Studies. The cakes grew popular in Korea in the 1980s, when people fell in love with the whipped cream icing, she said.

The story goes on to describe steam-baked Butterfield farm cakes, which sound really appetizing. When I'm back in OC, shall probably check out both. I've never been a big fan of Korean-style bakeries, some of which have dry and bland cookies and cakes, but I do like the moist, custard-filled cakes you find. 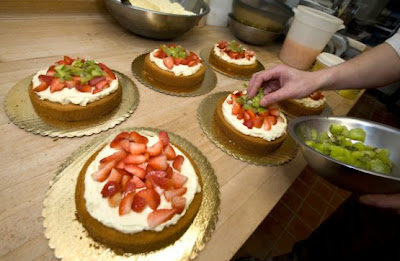 Now Manmi says they don't sell these as Christmas cakes per se, but back in Korea (and Japan and much of the rest of East Asia) this is exactly what people buy for Christmas (what some say is part of the destruction of Christmas in places like South Korea or Japan, where its newfound character as a second Valentine's Day has derisively earned it the nickname Sexmas... a pun that works in Japanese and Korean if you replace the Chinese character for 성/せい, meaning holy, with its homophonous counterpart meaning sex: 聖誕祭 replaced by 性誕祭, if I'm putting that together properly).

Back in the 1990s, there was one of those social commentaries that likened people to some person or object in order to illustrate a point. In this case it was women as Christmas cakes, with the date in December corresponding to their age. Around the 22nd or 23rd, it may be a little early but some people are buying the Christmas cake (bear in mind that this is Korean age, so we're talking 20 to 22). Around the 24th, lots of people are buying. By the 25th, that's the Christmas cake's last chance to be bought, because no one buys a Christmas cake from the 26th on. Yes, that's why a lot of women felt freaked out about being an old maid by the age of twenty-five, with many of them rushing off into a marriage to the least worst guy they could find.

I say women are like New Year's cakes... [Kushibo ducks]