Selig Harrison sounds so much like a "Juche apologist" that frequent One Free Korea commenter david woolley wonders aloud if SH is not a pseudonym for KJI:


Why is there no wikipedia entry for Selig Harrison? Is it because the no-vilification rules are unavoidable — or is he, in fact, a figment, a convenient name for an editorial actually penned by Kim Jong Il, much as Stalin wrote for Pravda under a pseudonym? Inquiring minds and all that.

While Mr Harrison is clearly some kind of nom, I don't think he's a nom de plume. If you follow this link to where I've skewered him in the past, you'll find a video of him on PBS's Newshour. There is a real person behind Dr Evil's advocate.

But hold the phone... Wasn't there a James Bond movie where the villain used extensive plastic surgery to change his appearance from Asian to a nordic European? (Indeed, it would appear the streets of Seoul and Tokyo are full of such villains.) And wasn't that villain a... wait for it... North Korean?! 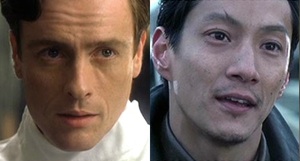 Maybe Mr Woolley and I are onto something. But would this grand ruse require the kidnaping of a Kangnam-area plastic surgeon? No, not with the advent of the hyper-realistic SPFX masks, those that are so convincing that a Polish immigrant had bank employees certain that he was a Black man as he robbed them.

In fact, an "elder" mask was recently used by a Chinese immigrant to get into Canada to seek asylum (it's in the same link above). And that means we must ask the inevitable: Could Selig Harrison be a North Korean operative with good English skills using a specially made "old man mask" to more effectively spread pro-Pyongyang propaganda?

I don't know about you, but now I'm convinced there's no other explanation.

UPDATE:
I forgot, no mention of a James Bond movie is complete unless I include a picture of one of the hotties. And while thoughts of Halle Berry are always enough to warm me up at Christmastime, Die Another Day included one of my all-time favorite Bond girls from the same movie, Miranda Frost (played by Rosamund Pike). 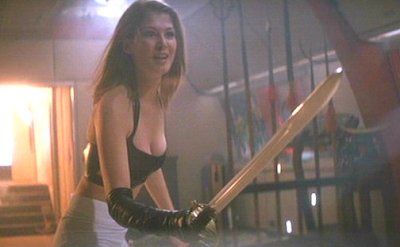 UPDATE 2:
Jack Pritchard, president of the Korea Economic Institute, has an article in the January 5 edition of the Korea Herald which also skewers Mr Harrison's proposal for the US to give South Korean territorial waters to North Korea.