Do you know taco?

But Korean tacos are to Urinara cuisine what Domino's is to Italian. And by that I mean a blasphemous bastardization that would be wholly unfamiliar to locals back in the motherland who would scoff at accepting such food as "theirs."

And it is against such a backdrop that the Korean taco has finally made its way "home" to Korea.


In an alley just off Garosoo-gil, the tree-lined street in Gangnam that has taken over from Apgujeong as the coolest place to be seen on weekends, is the three-month-old Grill5taco restaurant that has created its own version of Kogi’s fusion of Korean and Mexican foods.

Grill5taco was started by Ban Joo-hyung and Kim Hyun-chul and their original thought was to sell their tacos from trucks just like Kogi does. So they brought one over from the U.S. and hit the streets for a short time last year.

But the police kept slapping them with fines. Apparently, it’s OK to sell food from tents and from trucks that have permission to work in certain spots. But it’s against the law to just drive around wherever you want and sell food.

Mr. Kim said that’s when they decided to open the restaurant. “Garosoo-gil was the only neighborhood we considered,” he said.

Karosu-gil (Garosoo-gil) is a trendy little district not far from Shinsa-dong Station and Apkujŏng that is meant to be a harbinger of taste and style, so if it works there, it may work anywhere. 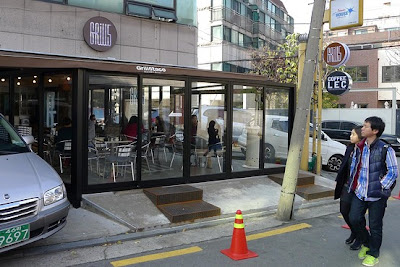 But will it work there? I think kalbi or pulgogi tacos are not a tough sell (the complementary starch from rice is replaced by a fried tortilla) as long as they make the cilantro optional, but kimchi quesadillas?! KoKos love themselves some cheese, but it's not something usually eaten with the spicy and pungent pickled veggies of Korea's national dish.

But who am I to talk? I like potato on my pizza.