From The Marmot's Hole, we get a reminder of a persistent meme:


It was a progressive President (Kim Dae Jung), who was awarded the Nobel Peace Prize for his summit with KJI. It’s comical now to see their famous photo together in light of the obvious payoff that got that photo-op in the first place – for which one of Kim’s administration was sentenced to prison.

A persistent but incorrect meme, attributed not just to the above commenter but shared and spread by countless commenters, bloggers, pundits, and journalists. 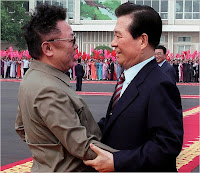 To be specific, the meme is that it was the Kim Daejung-Kim Jong-il summit in 2000 that got him the prize. That would be the null hypothesis, whereas the alternate hypothesis would be that without the summit he would still have gotten it.


Let's go directly to the horse's mouth for the reasons Kim Daejung was awarded the Nobel, the Nobel Committee's announcement itself:


The Norwegian Nobel Committee has decided to award the Nobel Peace Prize for 2000 to Kim Dae-jung for his work for democracy and human rights in South Korea and in East Asia in general, and for peace and reconciliation with North Korea in particular.

In the course of South Korea's decades of authoritarian rule, despite repeated threats on his life and long periods in exile, Kim Dae-jung gradually emerged as his country's leading spokesman for democracy. His election in 1997 as the republic's president marked South Korea's definitive entry among the world's democracies. As president, Kim Dae-jung has sought to consolidate democratic government and to promote internal reconciliation within South Korea.

With great moral strength, Kim Dae-jung has stood out in East Asia as a leading defender of universal human rights against attempts to limit the relevance of those rights in Asia. His commitment in favour of democracy in Burma and against repression in East Timor has been considerable.

Through his "sunshine policy", Kim Dae-jung has attempted to overcome more than fifty years of war and hostility between North and South Korea. His visit to North Korea gave impetus to a process which has reduced tension between the two countries. There may now be hope that the cold war will also come to an end in Korea. Kim Dae-jung has worked for South Korea's reconciliation with other neighbouring countries, especially Japan.

The Norwegian Nobel Committee wishes to express its recognition of the contributions made by North Korea's and other countries' leaders to advance reconciliation and possible reunification on the Korean peninsula.

Nowhere does it mention the summit, though that would be covered more generally under "sunshine policy." However, the reward itself was by no means just for the Sunshine Policy, as is clear by the statement by the Chair of the Norwegian Nobel Prize Committee in the award ceremony speech:


The Norwegian Nobel Committee has decided to award the Nobel Peace Prize for the year 2000 to Kim Dae-jung. He receives the prize for his lifelong work for democracy and human rights in South Korea and East Asia in general, and for peace and reconciliation with North Korea in particular. We welcome the Laureate here today.

Again, the summit is not mentioned, and what it is a part of is mentioned secondarily. It was his work long before 2000 that got him notice and got him the prize. That, in fact, was specifically mentioned when he was awarded the prize in 2000:


The question has been raised of whether it is too early to award the prize for a process of reconciliation which has only just begun. It would suffice to say in reply that Kim Dae-jung's work for human rights made him a worthy candidate irrespective of the recent developments in relations between the two Korean states.

But, you might protest, would he really have gotten the Nobel without the attention-grabbing Kim-Kim summit? Again, we can look at the words of the Nobel Committee for the answer. Kim Daejung's "lifelong work for democracy and human rights in South Korea" is on par with other award winners, notably Aung San Suu Kyi from Myanmar/Burma in 1991, Lech Walesa of Poland in 1983, Nelson Mandela in 1993, etc. The latter is notable because Kim Daejung has often been referred to as "the Nelson Mandela of Asia." 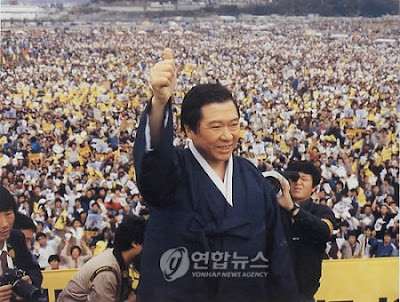 At best, the June 2000 summit may have caused the Nobel Committee to take notice of Kim Daejung's nomination, which would have been received by February 2000, four months before the summit actually took place, but a lot more happened prior to that which would also have gotten them to take notice. South Korea and its very messy moves toward democratization were a major story in 1987 and 1988 as the Olympics had all eyes on the ROK.

This was part and parcel of an Asian Spring that flourished a decade and a half before there was an Arab Spring. It was the likes of Corazon Aquino and Kim Daejung, among others, who shaped the East Asia of today, and it is for that primarily that Kim Daejung was awarded the Nobel.

These are people who risked their lives to bring democracy and respect for human rights to their country and their region. To diminish this by saying Kim Daejung "bought the Nobel Prize" — even if the case can be made that he bought that summit — is a revisionist travesty.

(More on Kim Daejung here, in my ode to him after he died)