I've written about it before, this idea of an undersea tunnel connecting South Korea's Pusan or Kŏjedo to Japan's Kyushu via Tsushima Island, several times in the past. It intrigues me.

Well, apparently it also intrigues the folks at the Chosun Ilbo (who usually only get intrigued by pictures of nude or scantily clad women).

They write that such a grand undertaking would take ten to fifteen years to construct and cost 110 to 120 trillion won. Trillion as in cho (조), a number you rarely ever get a chance to use (lop off three of the zeroes to see how much it would be in dollars). We could see this happening around the year 2020 (but don't expect too many English teachers to be helping out). 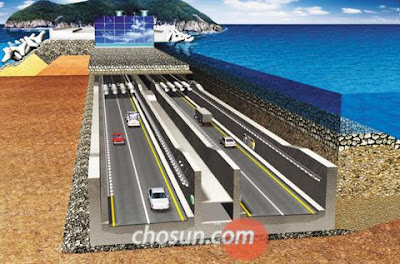