Going all the Weiwei (possibly NSFW) 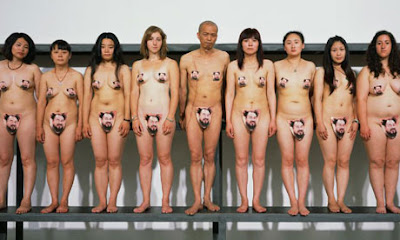 Kushibo wishes he had minions who would get naked and/or pay millions of dollars in (bogus) fines if I asked them to. Instead, Kushibo can barely squeeze a latte out of anyone.

But if you're Ai Weiwei, your supporters will strip and then take pictures of themselves to show their support. Then they'll post them online. This is enough to get them slapped with investigation for pornography by Chinese authorities.

There are more photos here, but be warned: most are men. Be also warned that someone thought it would be funny to throw in a picture of the Dear Leader and see if anyone noticed. (Or is Kim Jong-il secretly a supporter of decadent Chinese nudity?)

(Oh, and this post would come with a full-blown, bold-faced "NSFW!" warning, but I don't know where you work; this kinda thing may be ay-okay in your office place.)

UPDATE:
D'oh! I forgot to include anything on why Mr Ai Weiwei is a famous artist in the first place. I've seen his work here and there, but my most profound "encounter" with his work was viewing this 14-minute documentary on the production of his presentation of a 100 million (?) fake sunflower seeds (all ceramic and each hand painted) at The Tate in London (which is where my camera got stolen in 2007).

I also forgot to mention one of my original points in writing this: It smells of the tribulations of Professor Ma Kwangsoo (마광수), the Yonsei University professor who was imprisoned in 1995 when authorities deemed his novel Happy Sara to be obscene and pornographic, the same accusations thrown at Ai Weiwei.

South Korea was still sloughing off the vestiges of dictatorial rule, and it would be a while before the authorities realized they end up creating heroes out of their ideological foes when they treat them this way. It may be a while before the communists in Beijing realize how ham-fisted such heavy-handed tactics can be.