The Koreanization of American retail

Remember this, the idea of having a virtual wall of groceries that people waiting for the subway could scan with their smartphones so that those groceries could be delivered shortly after they got home? Well, it looks like K-Mart and Sears have taken notice and will try the same this holiday season.


This holiday season, Sears and Kmart are testing out shopping walls to empower smartphone owners to buy toys on the go.

The walls, which feature pictures of toys for sale from Sears and Kmart along with a quick response bar code for each item, will be located temporarily at malls, bus shelters, subway stations, airports and movie theaters. While waiting for a bus or browsing the mall this season, shoppers scan a QR code with their smartphone to buy a particular toy right on their device.

"Our goal is to make holiday shopping so simple that customers can find the perfect gift while they are traveling or going about their daily lives," said Julia Fitzgerald, chief digital engagement officer of toys and sporting goods for Sears.

The walls will be available at several movie theaters in the Los Angeles area, including the Regal Long Beach 26, AMC Burbank 16 and the Regal Irvine Spectrum 20.

The article mentions that this is being tried by Tesco in South Korea, which was mentioned in my first link.

This could be quite the game changer. This allows brick-and-mortar stores to expand with minimal cost — around the price of a kiosk — and stay afloat in the era of online shopping.

Only a small percentage of people take the train in Los Angeles or Orange County, and L.A.'s Metro and bus system aren't exactly filled with people with smartphones and cash to burn, so the Seoul-based model of putting up virtual stores in subway stations may not be the profitable way to go.

But the plan to put up the virtual stores around cineplexes in upscale malls is a capital idea. It's been a long time since I've been to the AMC Burbank, but I visit both the Regal Long Beach and the Regal Irvine Spectrum with some regularity. Those are places where people mill around waiting for their movie to start, and shopping for toys would be a great time-passer/killer.

Even better that the kids waiting with Mom and/or Dad might be enticed by the pictures of the toys and thus scream their head off until they get that thing they want (though they might end up learning patience, since there will be no instant gratification from zapping a bar code and waiting for the item to get delivered a few days later). 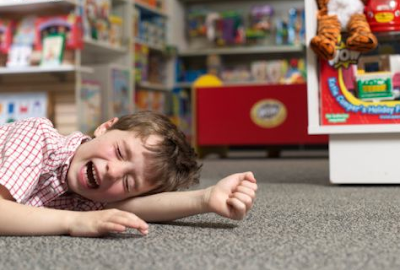