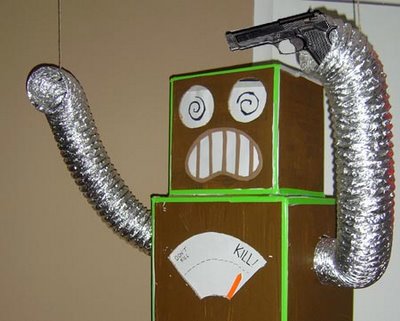 As part of its move to become the world leader in replacing job-seeking humans with cold, soulless machines, South Korea is reportedly planning to use robots as prison guards. A month-long test is being conducted in Pohang:


The robots are designed to patrol the corridors of corrective institutions, monitoring conditions inside the cells. If they detect sudden or unusual activity such as violent behavior they alert human guards.

“Unlike CCTV that just monitors cells through screens, the robots are programmed to analyze various activities of those in prison and identify abnormal behavior,” Prof. Lee Baik-chul of Kyonggi University, who is in charge of the 1 billion-won ($863,000) project, told the Journal.

I think this is a capital idea! Absolutely nothing could possibly go wrong with this plan, especially if they patrol the international wing of the jail where the robots' programming would never ever interpret foreigner behavior as abnormal.

By the way, this is what they're actually supposed to look like. Frankly, if this pilot study were being conducted in an American prison, I'd give it about 700 nanoseconds before K-prisonbot 3000 is made someone's bitch.