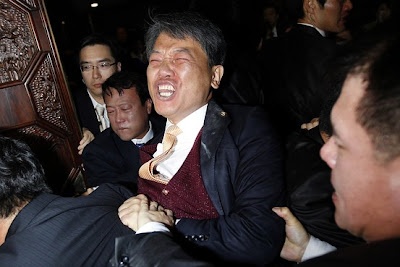 I talked about it in this post, and apparently members of the National Assembly were paying attention (yeah, yeah, I know I wasn't the only one talking about how the lockout and the tear gas and the oy vey were a national embarrassment). They have apparently apologized for their handling of the whole affair.


South Korean lawmakers Wednesday apologized and tried to create a political advantage out of their dramatic confrontation over trade legislation a day earlier, which included a tear-gas assault in the main legislative chamber, but analysts said the event was unlikely to drive a major shift in political opinion. ...

The chairman of the ruling Grand National Party, Hong Joon-pyo, at a news conference Wednesday, apologized for Tuesday's hastily convened parliamentary session, which was designed to avoid a physical clash. He promised that parliament would create legislation to help Korean businesses that are hurt by the lowered tariffs and liberalized regulations set out by the FTA.

The two main opposition parties staged events where leaders bowed deeply before TV cameras, another show of apology but this one for not being able to stop the ratification. ...

Meanwhile, Mr. Kim, the lawmaker who set off the tear gas in parliament, told a radio talk-show host that he would fight criminal charges if they are leveled against him. Police said they would wait for parliament officials to decide whether to charge Mr. Kim, but they are investigating how he got hold of the tear gas, which was police-issued and restricted.

If he does face charges, all Mr Kim has to do was claim he was drunk at the time. Amiright? Amiright? (It's meme #83.)

Anyway, at least the politicos recognize that their behavior was appalling. And as a cautiously optimistic supporter of the FTA, I'm disappointed that the passage of such a controversial piece of legislation wasn't completely above board and beyond reproach.