Unification Minister seeing the light about The Kim Who Wasn't There™? 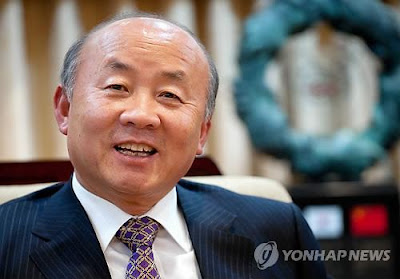 AFP is quoting a Yonhap article suggesting that even ROK Unification Minister Yu Woo-ik (the Tim Conway lookalike above) is having doubts that the ascension of North Korean strongman Kim Jong-il's son, Kim Jong-un, to a done deal.

"I assume that the power succession is under way, though the internal and external environment is not that good," Unification Minister Yu Woo-Ik told Yonhap news agency in an interview published Sunday.

Kim, 69, is believed to have speeded up the succession plan after suffering a stroke in August 2008.

In September last year he gave his youngest son Jong-Un senior party posts and appointed him a four-star general, in the clearest sign yet that he is the heir apparent.

Yu, whose comments were confirmed by his ministry, told Yonhap in the interview conducted Friday that the leader is healthy enough to perform his job.

He did not elaborate on Kim's health or what he meant by an unfavourable environment for the succession.

It is unclear whether the untested Jong-Un, in his late 20s, faces political opposition to what would be the second dynastic succession. Kim senior took power when his own father Kim Il-Sung died in 1994.

I, of course, have been saying this all along, but here and there I notice that others are jumping on the bandwagon.

Email ThisBlogThis!Share to TwitterShare to FacebookShare to Pinterest
Labels: Kim Jong-un, Korean unification, The Kim Who Wasn't There™