Biting the hand that feeds
their fish to someone else

North Korea versus China... Who to root for? Or rather, who to root against?

It seems that the North Koreans have taken over a Chinese fishing vessel and are holding the twenty-nine-member crew ransom until Beijing hands 1.2 million yuan (US$190K) over to Pyongyang. Much of the Western media are depicting this as a case of piracy, casting the Norks as the new Somalis. From the Associated Press:


A North Korean boat hijacked three boats with 29 Chinese fishermen on board and demanded 1.2 million yuan ($190,000) for their release, Chinese media reported Thursday.

It was unclear if a territorial dispute or piracy was behind the incident involving boats from the two communist-led nations. China is the North’s biggest diplomatic ally and source of economic assistance.

The fishing boats were hijacked in a Chinese section of the Yellow Sea on May 8 and moved to North Korean waters, the Beijing News reported. The paper said the North Korean boat was manned by armed men in blue hats and uniforms but didn’t otherwise identify them.

Border police in northeastern China’s coastal Liaoning province told the state newspaper they were in contact with the North Korean captors but declined to comment further.

One might think the AP is itself trying to show how tough it can be when reporting on North Korea, given the scrutiny it's been getting from those critical of the effusive reports from its freshly minted Pyongyang bureau, but a similar pro-Beijing perspective can be found at the Washington Post, AFP, the Los Angeles Times, the New York Times, The Guardian, etc. Although they're stating that the news is "according to Chinese reports," they're using terms like kidnapped at sea, ransom, and captors.

But just a doggone minute there. Those of us who pay closer attention to China because it's a quick boat ride away may have a different perspective on things, enough that we know it's unwise to accept Beijing's reports prima facie, even if the other party is Pyongyang, whose utterings should never be accepted prima facie.

See, those of us in the ROK know all about the Chinese fish pirates. We're used to reading about Chinese vessels illegally fishing in South Korea's Exclusive Economic Zone in the Yellow Sea or East China Sea and then attacking or even murdering ROK Coast Guard personnel who try to stop them. 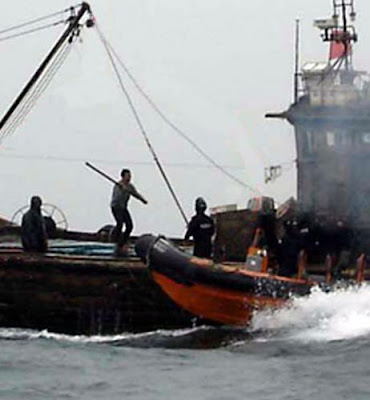 To put it bluntly: If this is what Chinese fishing vessels do to the South Koreans in ROK waters or its EEZ, while Beijing fully denies it, why should we believe the Chinese fishermen are innocents when the North Koreans detain their boat? Angered by Pyongyang's plans for missile and nuke tests, and knowing full well how the rest of the world sees North Korea, it would be perfectly natural for Chinese officials to depict those poor Chinese fishermen as victims rather than thieves. The rest of the world is certainly lapping it up.

But think about something. North Korea may love brinkmanship, but in recent years it also follows a pattern when it detains foreign nationals. I'm probably going to get flak for saying this, but back when everyone assumed CurrentTV journalists Euna Lee and Laura Ling were innocent travelers who had been kidnapped from the Chinese border region, I asserted the likelihood that the two Stupogants had actually entered North Korean territory. And I was right. Laura Ling claims that they were nonetheless captured after running back to Chinese territory, but it is highly doubtful that they would have been pursued and captured at all had they not entered North Korea illegally. And all along, the North Korean media was being truthful that the team had violated DPRK borders.

I'm still waiting to see what Pyongyang's Korea Central News Agency says about the Chinese fishing boats. Given the track record of the Chinese fish pirates and the not-so-inscrutible way one can discern fact from fiction in North Korean news media, I will be more inclined to believe that the Chinese had gone into North Korean waters or its EEZ if the North Korean media says they did.

My conclusion also stems in part from the realization that North Korea would have to have cojones the size of beach balls to capture and detain a Chinese fishing boat and then demand restitution unless they had cause.

Nevertheless, one also has to wonder about the Pyongyang regime's end game. As the title here suggests, Beijing is the hand that feeds Pyongyang (to a degree). Maybe this is just a way to let China know that it can never really control North Korea. Despite frequent claims of socialistic brotherhood, the North Koreans aren't particularly fond of the Chinese, regarding them in much the same way as those who made the 19th-century American cartoon below. 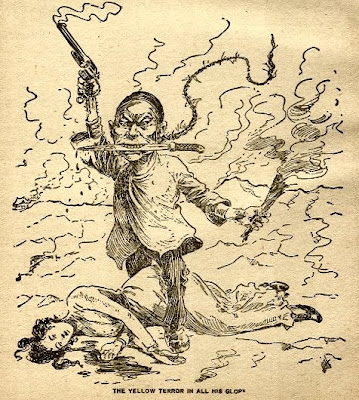 Those of us in South Korea are used to the Pyongyang regime b¡tch-slapping its ROK sponsors, so the Norks sticking it to the Chinese really isn't that unsurprising: North Korea's long-term strategy of pitting one economic/military/political power against another has involved begging for alms with one hand and then sucker-punching the benefactor with the other. During the Cold War, when Kim Ilsung was Moscow's and Beijing's headache, it was Russia-versus-China. Now it's a triangulation of Seoul, Beijing, and Washington (and occasionally a rectangulation or that includes Tokyo and/or Moscow).

And maybe China doesn't really have all that much control over North Korea to begin with. It can nudge the DPRK toward reform, it can promote socialism with Chinese characteristics, it can scold North Korea, it can huff and puff, but it's a mistaken calculus if you think that benefits of the PRC-DPRK relationship flow only one way. China wants to maintain its port presence in Rajin/Najin, and if it pisses off the Norks a bit too much, Beijing knows that Pyongyang can kick them out, like they've done or threatened to do to South Korean businesses and developers in Kŭmgangsan National Park or Kaesŏng Industrial Park.

So for now enjoy the show from the sidelines (and wonder just a bit if this is not part of a long-term strategy by Kim Jong-un or his handlers to move away from China and toward South Korea and/or its allies). In the meantime, I'm glad someone is standing up to the Chinese fish pirates. It looks like China is learning they messed with the wrong Korea.