Wall-E, in case you haven't seen it, is a brilliant film of the dystopian future genre in which a rag-tag band of humans find themselves fleeing chaos in a post-apocalyptic world in which anthropomorphic computers and robots are hell-bent on their destruction and/or preventing their return to Earth.

If you have seen Wall-E, you're probably wondering what I was on when I watched it. 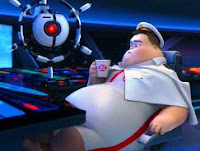 Yeah, yeah, it's a kids' film, with an i-Robot-you love story to boot, but it really is about a dystopian future, a post-apocalyptic world filled with destruction, loads and loads of chaos, and anthropomorphic computers and robots, some of which are preventing humankind's return to Earth. And one of them really does seem to be trying to kill the captain (or at least incapacitate him).

But the joke's on him: morbid obesity would have done the captain in soon anyway. 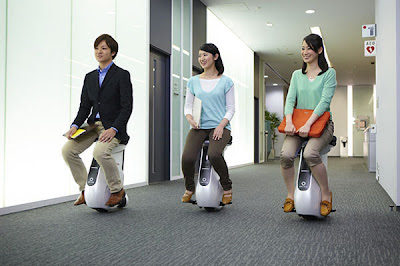 And that brings me to my point (yes, I do have one). Honda recently unveiled its answer to the Segway (as if we needed one): a glorified electronic unicycle called the Uni-Cub. They might as well have called it the Uni-Club, because it will figuratively club you to death.

You're probably wondering what I am on now, but bear with me, please. When the Segway was first released, it was hailed for the supposed community-altering aspects it would bring. Instead of jumping in their cars, people would hop on their Segways and zippily go places that were a little too far to walk but too close for the guilt-ridden to drive (yes, there are a few of us).

The Segway was too expensive, too bulky, and it caused presidents to fall on their face. But the Honda Uni-Cub aims to resolve at least one of those issues, since it can even be used indoors. Simply put, you can, if you so desired, never walk anywhere.

And that brings us back to Wall-E's world. This is technology gone horribly wrong. What is the difference between the top photo and this one just above? Holographic computer screens and about 50 kilos per person.

This is the part of the essay where my public health background kicks in: God made us bipedal for a reason. Walking provides us with salubrious functionality that goes way beyond getting from Point A to Point B. It keeps our blood pumping, it provides just enough stress on our skeleton that it encourages healthy bone replacement, and it helps regulate blood sugar. I run three miles a day, but if you can't run or jog then you should walk.

Even just a walk around the block with your dog, your s.o., and/or your kids or parents would do wonders for your health and longevity that you wouldn't get if you were mostly stationary and sedentary. Those of us in public health simply cannot emphasize that enough (seriously, we can't stop, it's like a genetic flaw or something).

And that leads me to what should by now be an obvious conclusion: Honda's Uni-Cub is part of a plot by the Japanese government to once and for all solve its demographic crisis. If you don't know what I'm talking about, take a look a the charts on this post (a very high-traffic post for this blog, and one of only two in this blog's top ten that don't include scantily clad women). Japan's "population pyramid" is an inverted pyramid, and South Korea is catching up on this trend. 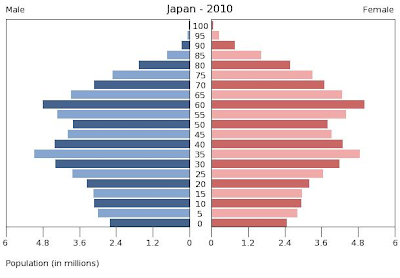 No economist has yet figured out how to maintain high standards of living with a graying population characteristic of an inverted pyramid like this. 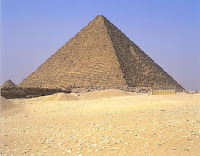 Simply put, what had long been considered a "normal" population distribution was a pyramid like the one at right, where it had a large base of young people and it tapered off at the top where all the old people (i.e., retirees) would be. The idea being that those toward the bottom would work and toil (much like the people who built the actual pyramids) and the fruits of their labor would be enough to support the elderly in their old age, as well as the base (which is made up of children who, thanks to Charles Dickens, can no longer be put to work legally).

But years of declining birth rates have meant loads of old people and not enough young workers. We used to have twenty workers per retiree, and soon we'll have just around two because the top is growing faster than future workers are being replaced and the elderly are living to 100 instead of dying a year or so after retirement due to smoking-related illness, preventable infections, public safety problems, or nagging.


Replacement birth rate is about 2.1 children per adult woman (2.0 to replace the woman and the man who impregnated her, presumably her husband or long-term boyfriend, and 0.1 to replace those who die before reproducing or never marry). But countries like South Korea, for example, implemented birth control programs so successful that its birth rate plummeted from something like seven children per woman (not an exaggeration even though it sounds like one) to just 1.2. That's two people being replaced by 1.2 offspring. That is the very definition of a dying society and the reason why Korea is now embracing immigration and its own brand of "multiculturalism" (다문화주의).

The Japanese have the same problem as Korea, but have chosen (so far) to eschew immigration in favor of technological solutions. And by that, I mean robots. Robots will be trained programmed to take care of the elderly and do all the tedious tasks that now require a fully human health care worker. But denial is, like the aforementioned pyramid, a river in Egypt, and this technological fix can only go part of the way.

Ostensibly, Honda's Uni-Cub will be part of this effort to handle the elderly like glazed donuts on the conveyor belt at Krispy Kreme, but I'm pretty sure that they were really designed as part of some darker final robotic solution (my ominous point from several paragraphs up, in case you were wondering just where the hel1 this tangent was going).

It's pretty clear: Honda's Uni-Cub is part of the government's effort to trim the top of the inverted pyramid by inducing obesity in the Japanese population. Start 'em young... er, youngerish. Give 'em a Uni-Cub at the age of, say fifty, and by the time they reach seventy or so, when their government pensions are kicking in, about half of them will be just like the scooter-lounging humanity in Wall-E. And that means they will kick off at seventy-five instead of ninety-five, thus relieving pressure on the non-retired population.