Fine Young Cannibals (alternate title: Y'know, this is how Mad Cow got started)

It's a basic rule of nature that animals should not eat their own kind. Indeed, cows eating feed made from other cows is how prions and other dangerous proteins and what-not spread from individual to individual. (And it's why it's a bad idea to feed cows feed made from the feces of chickens that were themselves fed cow protein, as happens today.)

But someone in China thinks that human flesh makes for a wonderful "performance enhancement drug," and South Korean authorities are up in arms about it.


Since August, Korean authorities have discovered nearly 17,500 of the human flesh capsules in the luggage of tourists and in international mail, the state-run Korea Customs service said in a statement Monday.

The pills, disguised as performance enhancement drugs, have been smuggled in by ethnic Koreans living in northern Chinese cities and contain so-called super bacteria that is hazardous to human health, the statement said.

South Korea’s crackdown on the drugs began last year after SBS, one of the nation’s major television broadcasters, ran a documentary accusing Chinese pharmaceutical companies of collaborating with abortion clinics to make pills allegedly made of human fetuses and the remains of dead infants.

The documentary claimed that DNA tests verified that the pills were made from powdered humans.

Demand for the pills has been driven by the belief that the fetus is a “tonic” for disease, the China Daily cited the documentary as saying. Consumption of human placentas is more common in China, where it is believed to help revive blood supply and circulation, according to the China Daily report. A report in the Global Times, a tabloid published by the official People’s Daily, said the human flesh pill were used to enhance sexual performance.

I probably should try to track down this story in Korean, since I'm guessing "performance enhancement" might be, like "stamina" (스태미너), a euphemism for getting it up (and getting it to stay up), which of course is also a euphemism.

Seriously, I thought that the advent of erectile dysfunction drugs like Viagra, Cialis, and Levitra would herald an end to the absurd cottage industry of powdered rhino horns, ground-up tiger penis bones, deer antler steeped in a tea, whole snake in a vat of hard liquor, and, I guess, powdered human fetuses.


This fetus story is very troubling indeed, in part because, if there is profit to be made in something, it tends to boost the supply. If we get all freakonomics on this particular commodity, that means profits can drive abortions, just as, say, privately run executions could in the long run drive demand for sentences of capital punishment (sorry, I just got done reading Donna Selman and Paul Leighton's Punishment for Sale, a book describing how privately run prisons leads to lobbying for harsher sentencing for more people). In a sick, sad world (i.e., socialism with Chinese characteristics), Korean demand for these pills leads to Chinese fetuses being aborted and possibly even babies being killed.

Is that really such an absurd position I'm taking? I mean, more absurd than consuming powdered Chinese fetuses in the first place?

This is wrong on so many levels, not least for the myriad known and as-yet-unknown health risks of becoming a cannibal. Among them, ROK health authorities believe they contain superbugs.

Is this how the zombie apocalypse starts?

[UPDATE: The Marmot's Hole has a post and lengthy discussion on the same topic here.]

(I once thought I'd be safe on Oahu if there ever were a zombie apocalypse, but I think eventually, out of the millions of zombified [<-- that's a word!] humans, a few of them would, guided by the simple impulses of their brain stem, head out for the water in an an arms flailing type of motion and they'd end up propelling themselves to islands such as this. For all our sakes, please stop consuming the Chinese Fetus Enhancement Pills.) 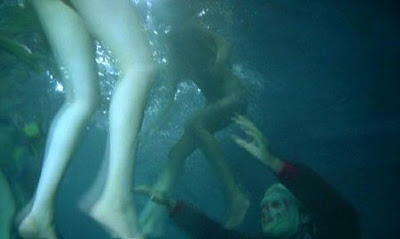