Coffee zombies will outlive us all 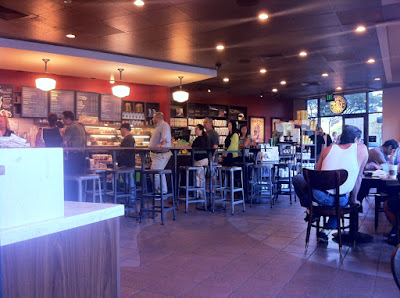 It's shortly before 7 a.m. here in the Aloha State, and I'm parked for a couple hours in the second of two Starbucks at the Ward Centers while I wait for someone I'm ferrying around Honolulu for a series of appointments. I've been here since 6:30, but the throng of coffee zombies (combies?) is just now starting to file in. There are at least ten people in line to order, but the line goes out the door, so I can't count everyone.

No doubt they've all crowded to this ubiquitous coffee mecca hub (there, that makes this post Korea-related) because they've heard the news that, based on a study in the New England Journal of Medicine, coffee drinkers promotes longevity:


A large-scale study of 400,000 people offers good news for coffee-drinkers: you might just live longer.

The study is the largest ever done on the issue, and the results should reassure any coffee lovers who think it's a guilty pleasure that may do harm. And whether it's regular or decaf doesn't even matter.

"There may actually be a modest benefit of coffee drinking," said lead researcher Neal Freedman of the National Cancer Institute.

The study, published online in the May 16 issue of the New England Journal of Medicine, kicked off in 1995 and involved 402,260 AARP members ages 50 to 71 who lived in California, Florida, Louisiana, New Jersey, North Carolina, Pennsylvania and Atlanta and Detroit. People who already had heart disease, stroke or cancer weren't included in the study, nor were extreme eaters who ate too many or too few calories per day. The rest gave information on coffee drinking once, at the start of the study.

But what these gushing headlines don't tell you is that those extra years you add to your life are all spent (a) waiting in line at Starbucks and Coffee Bean and (b) working more hours in order to pay for your java habit.

(I kid! I kid! I've in fact made the same joke about running: One's three hours spent running half an hour a day six or seven times a week adds up to about the same time all that heart-healthy behavior will increase one's life. This is actually not true, as regular exercise adds quite a few years to one's life, but it takes up only one or two percent of the day.)

In the meantime, enjoy a half-caf caffe mocha with a small dollop of whipped cream. On me (in spirit, at least).

UPDATE:
After perusing the abstract of the NEJM article, I thought I'd get all grad studenty on the actual report. Notable things are highlighted:


METHODS
We examined the association of coffee drinking with subsequent total and cause-specific mortality among 229,119 men and 173,141 women in the National Institutes of Health–AARP Diet and Health Study who were 50 to 71 years of age at baseline. Participants with cancer, heart disease, and stroke were excluded. Coffee consumption was assessed once at baseline.

CONCLUSIONS
In this large prospective study, coffee consumption was inversely associated with total and cause-specific mortality. Whether this was a causal or associational finding cannot be determined from our data.

Note that (from the methods section) the study did not include participants who had cancer, heart disease, or stroke. If, hypothetically, there were in fact a link whereby coffee were causing greater incidence of cancer, heart disease, or stroke but those people were excluded from the study, this would actually lead to dangerous coffee (in our hypothetical) appearing to be health-promoting. A follow-up study whereby those who already had those conditions were included would be a good next step.

The "inverse association" between coffee and deaths means more coffee leads to less mortality (note also that they don't know if it's causal). But interestingly coffee consumption wasn't associated with lower cancer deaths. Could this be because of the aforementioned correlation between coffee drinking and having been a former smoker? More to the point, for those of us who drink two cups of coffee a day but never smoked, would the health benefits extend to cancer as well? Some indications say yes.

UPDATE 2:
Sarah Kliff at the Washington Post pooh-poohed the study, but I think she got her read wrong (or did I?). She notes:


To start, individuals who had the biggest reductions in rates of premature death drank a ton of coffee, six or more cups each day. The average coffee drinker consumes about half that amount, or 3.1 cups each day. If you want to get all of coffee’s protective effects, you would need to down two venti Starbucks coffees - and still have to drink another, short cup of java to cross the finish line.

I think she is incorrect. For men and women, it was the 4-5 cups category, not the 6+ category, that saw the greatest benefit.

Moreover, the benefit for the average coffee drinker (she cites 3.1 cups per day) is close to that of the most benefitted group: men in the 2-3 cups category have a 0.90 hazard ratio of death compared to non-coffee drinkers versus 0.88 hazard ratio for men in the 4-5 cups category. Meanwhile, women drinking 2-3 cups have a 0.87 ratio risk versus the 0.84 ratio risk for women drinking 4-5 cups.

Drinking an extra two cups to gain that extra little reduction in ratio risk makes about as much sense as me getting a sex change operation to get the lower risk associated with coffee-drinking women (0.90 v 0.87).