With a hat tip to WK, I give you... Burmese kimchi! 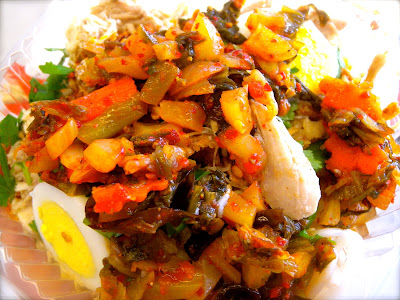 To which WK editorialized:

The header for the email was "WTF?", but that's a long-running header for all sorts of things sent back and forth between several of us. (WK wasn't also fond of the idea of kimchi beer.)

I'm guessing I have less of a problem with the Burmese kimchi than WK. Y'see, folks like ZenKimchi are adeptly promoting Korean food like there's no tomorrow, and like everything else, that comes with unintended consequences. As Korean food becomes more "mainstream," I've seen more and more examples of the word kimchi being used as a descriptive stand-in for other countries' pickled vegetable dishes.

And someday, when we start hearing about Irish kimchi, we know that usage has arrived. In the meantime, I'm guessing that ZenKimchi (judging by his comment at the recent smoothie post) would rather see pickled mustard leaves described as kimchi than Kyochon Chicken, Smoothie King, Kraze Burger, Mr Pizza, and Paris Baguette, marketed as Korean food.

Now, I am not a foodie. Simply put, I'm lethargic about trying new things but I like just about everything put in front of me, including things others don't like and things I probably shouldn't like. But I must admit that pickled mustard leaves with some egg and banana (?) and mango (?) thrown in sounds very appealing. (Hawaii has made me love mango, except during mango season, when they are literally falling off the trees and you can't give 'em away!)