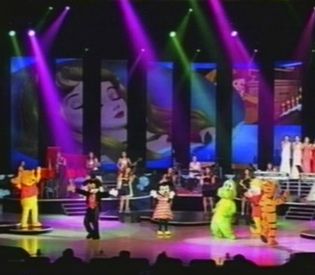 I hope these were just stolen costumes and not actual cast members kidnapped from Orange County, Tokyo, or Orlando and forced to dance for The Prodigious Progeny (i.e., Kim Jong-un).

At any rate, Mickey Mouse appeared in a country whose governance and economic characteristics bear his name. From the Boston Herald:


Performers dressed as Minnie Mouse, Tigger and others danced and pranced as footage from "Snow White," ”Dumbo," ”Beauty and the Beast" and other Disney movies played on a massive backdrop, according to still photos shown on state TV.

The inclusion of characters popular in the West — particularly from the United States, North Korea’s wartime enemy — is a notable change in direction for performances in Pyongyang. Actors and actresses also showed off new wardrobes, including strapless gowns and little black dresses.

In recent years, performances such as the "Arirang" mass games featured performers dressed as panda bears in homage to North Korean ally China.

This appears to be the first time Disney characters have been included in a major performance, though Winnie the Pooh and Mickey Mouse have been popular among children for several years. Backpacks, pencil cases and pajamas imported from China often feature Disney characters, and stories such as "Dumbo" have been translated into Korean for North Korean schoolchildren. However, it is unusual to make such images a central part of a North Korean performance and to publicize it on state TV.

Frankly, Minnie Mouse doesn't do a thing for me. I'd rather see more about the strapless gowns.

Whatever's going on up there (including the likelihood that these were not licensed appearances), it's telling that this kind of thing appears to be happening more and more in the DPRK. Perhaps the Swiss-educated KJU really does aim to bring more western exposure to the North.