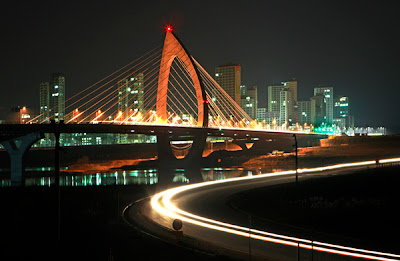 This is something the late Roh Moohyun had promised in order to get Ch'ungch'ŏng votes, and after a lot of hemming and hawing and Supreme Court overruling, it is now a dream coming true:


After a decade of wrangling, South Korea is set to inaugurate a new mini-capital seen by supporters as a developmental triumph and by critics as a classic pork-barrel project.

Sejong City will by 2015 house 16 ministries or agencies and 20 central government offices currently located in or near Seoul. More than 10,000 civil servants will work there when construction is completed.

The stated aim is to rebalance national development, in a country where Seoul and its satellite cities house almost half the population and account for almost half national output.

The new city, 120 kilometres (75 miles) south of Seoul, will formally open Sunday, with an inauguration ceremony Monday to be led by Prime Minister Kim Hwang-Sik.

But some 10 state bodies including the president's office, the foreign ministry, the defence ministry and parliament will stay in Seoul.

Kim himself will commute from Seoul for a while even after his office relocates to Sejong City in September. Critics say the split government will lead to wasted travelling hours and inefficiency.

The new city covers 465 square kilometres (186 square miles). A total of 22.5 trillion won (US$19.4 billion) -- including 8.5 trillion won in state funds -- is being spent on infrastructure, government buildings and homes for incoming residents.

I like the name "Sejong City," but I thought they should call it Komnaru (곰나루), the pure Korean for the Chinese characters in the region's name. But I'm weird.

Anyway, what are the over-under odds for how long it takes this new capital to become a cesspool of corruption and a den of iniquity?