Back in Seoul after an unusually long hiatus, I was eager to visit a few places I'd been reading about in the news and blogs. Among them was the Comfort Women statue (or should I say, enforced sex slaves) located right across the street from the Japanese embassy.

So last week I headed there with my Nikon D60 and my iPhone 4. I walked purposefully down the street (I'd been to the embassy a few times, once to purchase a used right-hand drive Toyota Crown back in the 1990s, so I knew where it was). Down the street, I could see several policemen in the area, which is hardly surprising since they are tasked with protecting the various foreign missions, including the embassy of the former occupiers.

But as I approached the statue and stopped in order to position my Nikon, I was told by the senior police officer there, in Korean, that I could not take any pictures of the statue. Obviously I asked why that would be, and he told me there had been threats made to the statue.

Lest someone think that my rusty-from-Hawaii's-ocean-breeze Korean skills may have yielded a comprehension FAIL!, the polite-but-stern senior police officer (who looked to be in his late forties) mentioned the English word "terror" when he reiterated the reason.

I am usually not a confrontational person, though I can be when the situation warrants. This was not one of those times, and I thought that I would try charm and reason (I am very charming when I want to be). I told the guy I am from Seoul but lately I've been studying in Hawaii where I do a Korea news blog, and I'd been reading about this poignant statue — which I support — and I was keen to get a picture. I told them I'd read about the right-wing Japanese asshat (though I didn't say asshat) who had messed with the statue and I was sure was on their minds, but they said their threat was one from the future.

He asked me what my blog was and I used the ambient wifi to quickly type www.rjkoehler.com on my iPhone to show him Monster Island. Fortunately I had something a little less ridiculous than usual as the top post and he did that pensive ajŏshi sigh to show he was going to relent.

Just one picture, he said. That, too, he reiterated.

I quickly had to decide whether I should use the Nikon or the iPhone. The latter had the advantage of instantaneous editing and, with the ambient wifi (I really need to trademark that phrase), I could send it out right away (Blogger has a function where you can send posts via an email to a specially created Blogger address) so I went with that.

I asked the senior police officer and his young juniors if they'd like to be in the picture. They declined and parted like the Red Sea. I got my lonesome picture of the lonesome girl, with a banner to An Chunggŭn in the background. 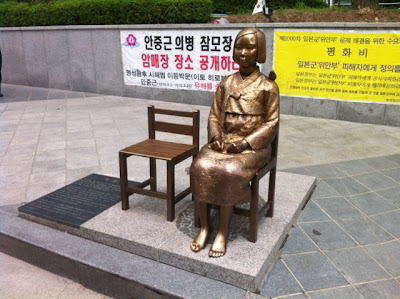 Though they didn't ask, I showed them the picture and went on my way (I was late for a meeting at a 1970s-ish tabang with a friend who works with the mayor).

Before I blogged the little incident, though, I started to wonder if this was prudent. I emailed The Marmot, Zen Kimchi, and a couple others and asked if they knew anything about a no-photos regulation. They said they didn't, mentioned it's in a public area and there should be no reason it can't be photographed, and said I should go ahead and blog about it (if the cautious Marmot says go ahead, I figure there's nothing to worry about; I hope I don't end up in some Michael Breen-esque legal matter... I'm too pretty for prison).

So this was all on my mind when I read the news, a few days later, that someone Korean asshat decided, in protest of the Japanese right-wing asshat, to drive his truck into the Japanese embassy.

Could it be that the "terror" threat they were worried about was a domestic one? And did the police momentarily mistake me for an asshat?