In what version of reality would it ever be a good idea for Korea to propose the resumption of "scientific whaling"?


Despite the success of K-pop and the rest of the Korean wave, the warm-and-fuzzy image of South Korea the world now seems to have is still a bit tenuous.

And when the rest of the world sometimes confuses you with neighbors like China (which is bad), North Korea (very, very bad), Japan (mixed bag), or yourself in the past (potentially bad), we're talking tower-of-Jenga-blocks tenuousness.

And it is against that backdrop that I would like whichever Republic of Korea officials are responsible for South Korean proposals at the International Whaling Commission to please reconsider their proposal to resume so-called "scientific hunting" of minke whales.

See, when the BBC is reporting on you being a part of this loathed practice, that's a very bad sign:


South Korea is proposing to hunt whales under regulations permitting scientific research whaling, echoing the programmes of its neighbour, Japan.

Hunting would take place near the Korean coast on minke whales. How many would be caught is unclear.

The South Korean delegation to the International Whaling Commission (IWC) said the research was needed "for the proper assessment of whale stocks".

Many governments at the IWC meeting condemned the Korean announcement.

There are several different stocks, or groups, of minke whales in the region, and one of the them, the so-called J-stock, is severely depleted.

Given that fact, "we believe that scientific whaling on this stock borders on the reckless," New Zealand's delegation head, Gerard van Bohemen said.

But Joon-Suk Kang, the head of the South Korean delegation, said the programme was necessary to answer questions about minke whale stocks that non-lethal research had been unable to solve.

Questions they want to answer: Which minke whale stock is most delicious?

Look, I get that down in Ulsan there is a history of whaling supposedly eight thousand years old, but even the froggiest of officials in the deepest of wells must realize that our buddies next door in Japan are hated around the world by many people because they keep trying to pursue "scientific" whaling where the carcasses of these giant sea mammals legally end up on dinner plates because it would be a shame for them to go to waste.

Why, oh why, would you want to drag Korea into that miasma of piss-poor international relations?

Let me put it another way, ROK officials at the IWC. Japan's obstinacy has been on display lately as diplomats and not just right-wing nut jobs try to pressure the United States to remove local memorials to the Comfort Women (brutalized World War II-era sex slaves, for those of you living in a wifi-less cave). Japan's unpleasant combination of boneheadedness and pigheadedness on that issue is exactly how much of the world sees Japan's intransigence on "scientific" whaling (it doesn't help that they kill dolphins in documentaries), and you would basically paint South Korea with the same blood-soaked brush.

Let me put it yet another way: If countries like Great Britain were willing to lead a boycott of the 1988 Seoul Olympiad over consumption of dog meat, do you think South Korea will be able to dodge threats of a similar boycott of the 2018 Pyongchang Winter Olympics? (One of the problems of hosting major international events is that it means your cojones are hanging right out in the open.)

Don't think for a minute that I am the only one who's thought of that. Ditto with campaigns against Hyundai, Kia, Samsung, and LG.


Ultimately you have to ask: Is it worth it? Is reviving or preserving the whaling industry in Ulsan worth the scathing bad press, tarnished national reputation, and potential economic losses that will likely be incurred from this proposal?

Sorry, even though I don't like other countries pushing South Korea around (and I see no small amount of hypocrisy that so many critics of whaling come from the US and the UK which hunted several species nearly to extinction), I have to say no on this one.

See, whaling conjures up notions around the world of brutal murder of not just sentient but highly intelligent creatures and thus it stinks of being morally wrong. And that means adding them to the list of such creatures your country kills for food is indelibly bad for the national image (as well as stinking of being morally wrong). 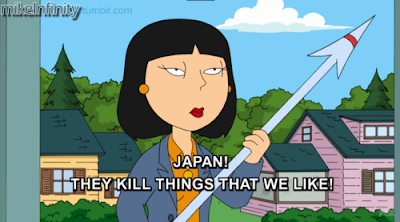