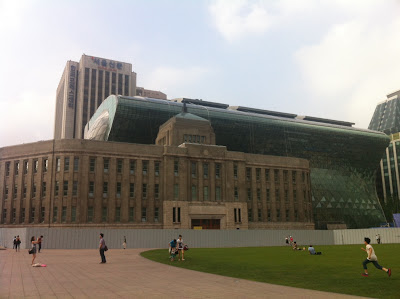 I suspect that I'm not the first to comment on this, but it's striking how much the new City Hall Annex looks like a giant wave about to crash onto the old City Hall built during the days of Imperial Japanese rule.

And it looks like the person in the lower right is running for her life. Maybe people who see in this design a tsunami will criticize Korea's cultural insensitivity, as some did regarding a certain misinterpreted city in the clouds.

UPDATE:
Yesterday I had tea at an oldie-time tabang-looking shop in the basement of the Press Building with a friend who works with the mayor. She says most City Hall employees she knows do not like the new building. Yes, they were mocking it in pretty much the same way I was, but they have other more practical complaints as well. And maybe they should start calling it 씨나미청.