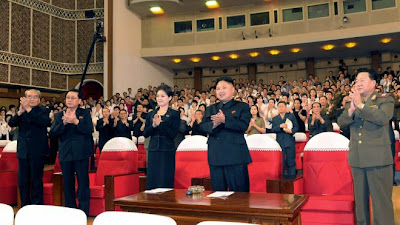 Speculation like "Who's the hottie with ...?" is something we might expect of royal watchers or the tabloid press, but here it is, addressing the "mysterious" and "elegant" young woman seen with The Prodigious Progeny on at least two occasions, including a concert.

From the Associated Press, via Fox News ("we distort, you comply," tee hee):


A mysterious young woman appearing at the side of North Korea's new leader is the subject of speculation she could be Kim Jong Un's younger sister or even wife, but Pyongyang has released no details.

North Korean state TV on Sunday showed an elegant, somber young woman in a black jacket and skirt bowing with Kim at a ceremony marking the 18th anniversary of the death of his grandfather, North Korea founder Kim Il Sung.

She is believed to be the same woman shown Saturday seated next to Kim at a concert. North Korean state broadcaster KRT showed her walking into the concert hall behind Kim, and they clapped together at the end of Friday's performance.

The North's Rodong Sinmun newspaper on Monday ran a photo of Kim and the woman on its website without identifying her. Her appearances with Kim were front-page news in South Korean media.

A few thoughts. First, I don't think that's his sister, but it could be and if it is, then more power to him because by all accounts (i.e., all both of them) she is smart and sharp and she might help him navigate the ship of state past all the dinosaurs and into the territory of modernity (warning: that sentence contained mixed metaphors).

Second, if it's not his sister, then I have to admire the way in which KJU and/or his handlers are reshaping the North's image in the global media (and let's hope it is accompanied by real change). It would be quite a trip if the Norks have in mind a royal wedding to rival that of Kate Middleton and what's-his-face.

Final thought: It's good to be the Kim.

UPDATE 2:
Via ROK Drop, we get news that the woman may be a once-popular vocalist named Hyon Song-wol, who disappeared from public view around the time Kim Jong-un was supposedly being groomed to take over. She is reportedly married with a kid. But would that stop a despot? Frankly, I think this only adds to the new tabloidesque nature of the regime (in a good way), and I'm more than happy to know that the dictator in control of the artillery a few dozens of miles away might be getting laid regularly.

UPDATE 1:
The reference to Kate Middleton reminded me of something I'd written in my KJI/KJU caption contests in late 2010 (see here and here) that now seems eerily prescient: 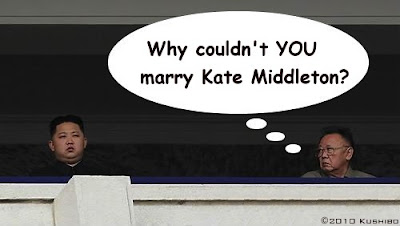