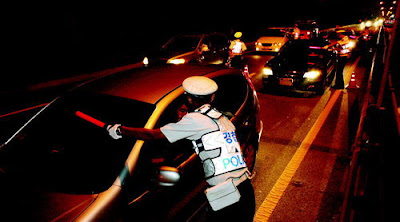 This is one more nail (along with the advent of ubiquitous sobriety checkpoints) in the coffin of drunk driving:


Police said Thursday they are planning to confiscate vehicles from habitual drunk drivers in a desperate bid to wipe out inebriated drivers.

Announcing a comprehensive package of measures to revamp the traffic regulations, the Seoul Metropolitan Police Agency said efforts are underway to adopt the confiscation plan as well as other measures to improve the traffic system.

Putting the eradication of drunk driving as the top priority, the police said they will step up the crackdown on those getting behind the wheel under the influence of alcohol.

According to the envisioned plans, drivers with repeated drunk driving offenses will have to forfeit their vehicles as part of their punishment, the police said.

The police noted they will also push to root out illegal parking, motorcycle gangs as well as drivers who cause severe traffic jams by trailing cars bumper-to-bumper to pass an intersection even after the light has turned red during busy traffic hours.

Monitoring of drink drivers in areas near popular nightlife spots and frequent accident sites will be also intensified, the police said.

This may be a good time to invest in a 대리운전 company.