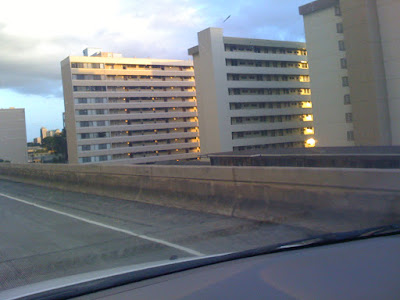 It's sort of eerie. I often pass by these apartments that are just off Interstate H1, a bit east of downtown Honolulu. What's weird is that the apartment to the left looks almost exactly like the apartment I own in central Seoul. Same color and everything. Probably just as ridiculously expensive, too.

Oahu has some beautiful places, but Honolulu itself has some drab, cookie-cutter apartment blocks that are not all that attractive. Many parts of the city are a veritable concrete jungle, à la Seoul and many other East Asian cities. Not that I dislike Seoul or Honolulu, but they could do a little better to make high-density housing look a little more attractive. Well, actually, South Korean cities are doing a lot better lately with that: it would be better if they look more like Fukuoka than, say, Taipei (no offense, Taipei).
And plant more trees!
on December 07, 2008

Email ThisBlogThis!Share to TwitterShare to FacebookShare to Pinterest
Labels: around Honolulu, Hawaii, Seoul