Person on the street: What's up with the hanbok? 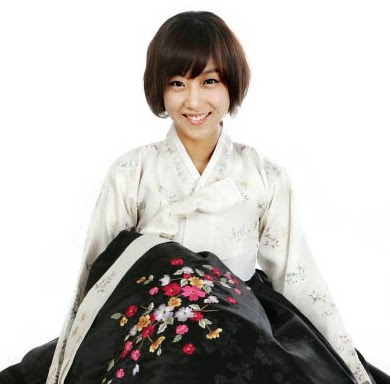 The rising wave of Korean pop culture has brought Korean films, television shows, songs, and now even fashion to the rest of the world. Although the loose-fitting, maternity clothing-like traditional hanbok might look a little out of place not just in Seoul, but also on the streets of other cities around the world, it's still possible to spot one here and there. Not just in the elegant customary form but sometimes also with a newer, more modern flair. Even celebrities wear them.

So, Monster Island wants to know: Why are you wearing that hanbok?

The many colorful layers of luxury inside and outside the royal hanbok make me feel like a princess. It's great for when you get out of a car at 3 a.m. and you're totally wasted: If the paparazzi catch a glimpse of something pink, it probably won't be your hoo-ha.
— Britney S. (former child actress), Kentwood LA 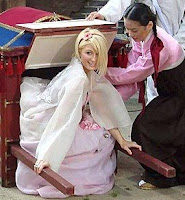 The hanbok represents purity and innocence. When a girl puts it on, she feels as if she's taken back to an earlier time when the world around her was simpler. Though the dress is not form-fitting or sensual according to our modern-day zeitgeist, whenever I wear it I feel attractive, but in an entirely wholesome way. When I am adorned in a hanbok, I feel that all I encounter will look at me and see an edifying soul.

And that works for me, since right now everyone thinks I'm a whore.
— P. Hilton (reality television contestant), West Hollywood CA

The flowing cut of the hanbok means I can hide a great deal of contraband.
— Marta G., Miami FL 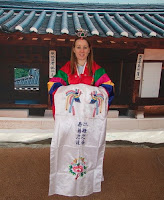 I'm wearing this so I can trick some near-sighted guy with an Asian fetish into going out with me.
— V. Nosalek (telemarketer), Brookline MA

I'm going to spend the next seven or eight months making my parents think I'm going through a "Korean wave" phase. Wear the hanbok, listen to some Rain, watch some "Oldboy." After the baby's born and I give it up for adoption, it's back to halter tops and jeans that show off my butt crack.
— J. Finkelman (high school junior), Albert Lea MN

Korean? I thought this was Japanese. Damn Koreans always following me around their store like I'm going to steal something. I've got a job, fool. I make my own money, goddammit! I'm a muther-fuckin' CPA at a top accounting firm, muther fucker! Get this shit off me!
—Jerome A. (certified public accountant), Centreville VA

Hanbok? This is how everyone dresses in the future. In the late 21st century, after the Koreans have perfected mass hypnosis through cellular phones and taken over the industrialized world, all citizens are forced to dress like 15th century Confucian academics and eat a diet rich in rice, seaweed, and kimchi.

By the way, can you direct me to Samsung headquarters? The underground rebellion on Lunar Station 82 has ordered me to destroy Samsung's R&D division. I think it's on Sixth and Broadway. Does that sound right?
— Lance P. (former minion and explosives specialist), Earth Orbiter 37

This is a hanbok? Cool! I was just going for a formal dress that screams "Do me!"
— Nicky H. (fashion school dropout), New York City

Does this mean I'm not gonna be in that FUBU Japan commercial?
—Jerome A. (certified public accountant), Centreville VA

Email ThisBlogThis!Share to TwitterShare to FacebookShare to Pinterest
Labels: hanbok, Person on the street