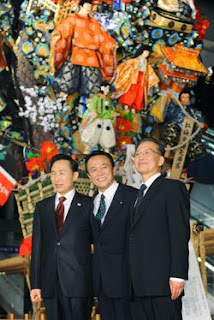 The leaders of South Korea, Japan, and China all met in Fukuoka Prefecture on Saturday to discuss ways "to enhance coordination to counter the global economic turmoil." The Japan Times says it was their "first-ever trilateral summit." (The Korea Herald has the story here; The Korea Times has it here.)
With the Korean won (KRW) hovering around 1400 won/dollar—and as bad as 1500 won/dollar recently—there is genuine concern that the volatility of the KRW's value will adversely affect their own economies. This represents a 30% drop over the last year, with most of that coming in the past few months. A "natural" level for the KRW is about 1000 won/dollar.
Toward that end, Japanese prime minister Taro Aso agreed to increase Japan's currency-swap agreement with South Korea to US$30 billion. Aso believes that the so-called Chiang Mai Initiative, set up in 2000 to enhance multilateral currency swaps, should be expanded in order to help weather the economic meltdown.
This is all a good sign. I'd especially like to see Seoul and Tokyo get their act together, in the spirit of the Obuchi-Kim agreements of the late 1990s, and move forward as partners instead of pandering to nationalistic elements in both countries.
And if China wants to get on board with economic and political stability, that's fine. As long as Taiwan isn't left hanging out to dry and the United States is still playing a major role.
The three leaders also talked about maintaining the six-party framework aimed at denuclearizing North Korea. This trilateral meeting is to be an annual thing—barring a Tokto-related meltdown in relations, I suppose—with the three meeting in China next year and in South Korea in 2010. They can take the Arex all the way to Seoul Station.
on December 14, 2008