That would be "Merry Christmas" in the local Hawaiian, bra.
And here's to a Feliz Navidad, Buon Natale, 메리 크리스마스, メリクリスマス, and Joyeux Noel! That pretty much exhausts all the languages that I've ever spent any real amount of time trying to learn.
The photo below is the observatories of Mauna Kea, the highest point in Hawaii, on the Big Island. That's about as wintery/Christmasy a scene as you're going to find in the Aloha State. With an elevation of 13,796 feet (4205 meters), there is usually snow found on the upper reaches of this volcano, whose name in Hawaiian means "white mountain." And, yes, the intrepid really do attempt to ski there. 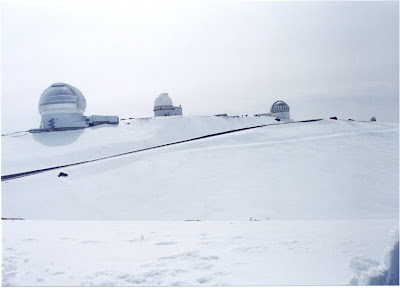