"Whopper Virgins": Offensive on so many levels

You know, Fox turned into a hardcore sex channel
so gradually, I didn't even notice. Yeesh!
— Marge Simpson, "Lisa's Wedding"

In pop sociology there is a term called "McDonaldization," referring to the trend toward homogeneity and sameness brought about by factors such as globalization, mass production, or even cultural hegemony. Hey, cut that out! I can hear your eyes rolling!

The thing is, you don't need a McDonald's to have McDonaldization. It can be brought about by other global corporations, like Coke™ and Pepsi™, General Motors and Toyota, Apple™ and Microsoft™, or even Burger King. 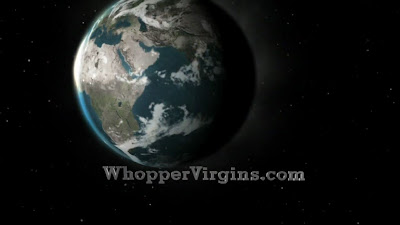 So I'm noticing on television lately these BK commercials where they go into some remote part of the world where the villagers there have supposedly never ever seen a burger, much less eaten one, and they have those beef patty neophytes do a taste test between a McDonald's Big Mac™ and a BK Whopper™. 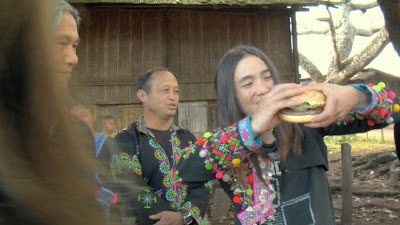 The neophytes are called "Whopper virgins," which is also the name of the website to which the viewer is directed. If you go there, you are shown a Discovery Channel-style documentary showing how they ran the taste test (objectively, apparently, since some of the "virgins" chose the Big Mac over the Whopper or they had no preference; the majority of those with a preference chose the Whopper. Surprise! D'uh). 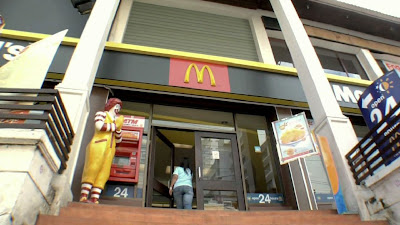 Above is a Mickey D's in Thailand, which is close to a Burger King. They brought the villagers to a taste test site that was within fifteen minutes of both a McDonald's and a Burger King so the burgers would be fresh. (I like how Ronald McDonald is doing a Thai greeting... that's "localization of globalization," kiddies!) 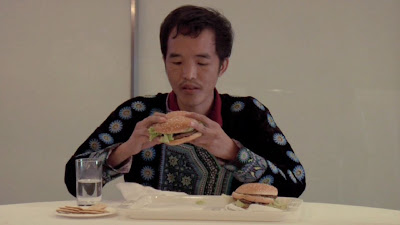 The villagers featured in the commercial (from which these scenes were captured with EyeTV) are all from a remote Thai village, but the faux National Geographic special shows the same effort in Romania and in Greenland.

Frankly, I am troubled by this. First, it's bad enough that American corporate hegemony has eroded the cultural and dietary practices of people all over the globe, but do we really need to find some of the last no-burger holdouts and force them to participate in a corporate-sponsored taste test designed to boost consumerism among a largely overweight customer base back home? [Burger King, I hate you for making me sound like a freakin' leftist!]

I mean, do we really need to contaminate the palate of the few that are left who have never let a bleached flour bun cross their lips? Sure, there's something to be said for trying new things. I'm a resident of Seoul, where gutsy visitors try to steel themselves to try kaegogi [also gaegogi; 개고기, dog meat] or pŏndegi [beondegi; 번데기, silkworm larvae, a favorite of kids for God only knows what reason], but with hegemonic fast-food it's not the same.

I mean, it's not like pŏndegi is taking over the world. It's not like Big Beondegi is producing silkworm larvae en masse with hormones and excessive antibiotics all the while polluting the local water supply with manure runoff (or are they?) and you consuming one is just one more nail in the coffin of some ecosystem somewhere.

I love me a good burger. I'm thankful to be living in a place where I can go to Carl's Jr anytime I want, and I don't mind getting a double cheeseburger every now and then. But do we need to push it on the locals in Thailand, Romania, and Greenland? Sheesh. 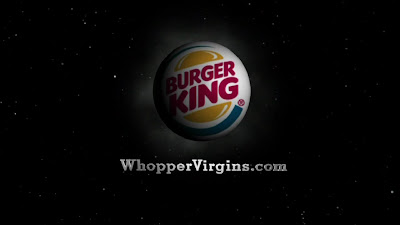 Now, call me a prude, but I'm also not terribly happy with their word choice. I realize "virgin" lately been used in place of words like neophyte, novice, rookie, or even newbie, but I see this as creative laziness. By using a word that clearly has a meaning intrinsically related to sexual activity, they're subliminally trying to give their campaign a bit of an edge.

"Whopper Newbies." Couldn't they have gone for cute over edgy? Sheesh. [Anyone back in Korea able to tell me if there is a similar advertising campaign going on over there and, if so, what term they're using in lieu of "Whopper virgins"?]

Okay, fine. We're adults. But then I started hearing people use it in conversation in front of children. In other words, it has become so engrained in our heads that we easily forget (temporarily) that it means "Mothers I'd like to fuck." (I'm assuming cyber nannies are blocking kids from reading this blog due to the profanity; if so, kudos on their mom and dad for their mad parenting skills.)

Mothers I'd like to fuck... said in code in front of kids. Sheesh.

It's pervasive. On the radio here in Honolulu, 101.9 was telling listeners in evening drive-time to go to their website to see "Nailin' Palin" pictures. Drive-time is when some parents might actually be taking their kids somewhere. Good way to show corporate responsibility, Star 101.9.

BK is a willing player in all this. They have chosen to further perpetuate this pornification of culture solely for the purpose of making a profit. It's just too much. Burger King, you've lost a customer. [And I hate you for making me sound like a leftist prude.]

UPDATE:
More weird or borderline offensiveness from Burger King. How about a paper placemat depicting a de-pantsed onion about to get probed very uncomfortably. 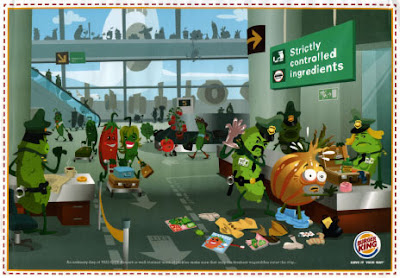 Or an ad (frankly, I have no idea where this one is from) depicting the Burger KreepKing obviously trying to prove he's a red-blooded male, after some obvious questioning (including this disturbing parody): 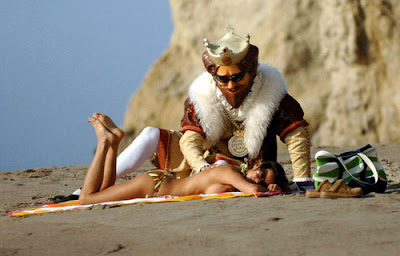 Email ThisBlogThis!Share to TwitterShare to FacebookShare to Pinterest
Labels: pornification