And the award for lamest headline of the week goes to the Wall Street Journal, for this one: "South Koreans Still Unbowed" (it's about archery's 2011 World Championships in Torino on Sunday).

And the non-story of the day is North Korea temporarily presiding over the UN's nuclear disarmament body (#4). It's for a term that's just a matter of weeks, determined by well-known system of rotation, but it's being used as a pretext for "getting the US out of the UN" (or getting the UN out of the US). In fact, the UN is an important organization that, though flawed, does a lot of crucial stuff (HT to hoju_saram for link).

If the problem is that a country like the DPRK which has violated UN regulations on nuclear disarmament should not be in charge of the UN organization whose regulations it thumbed its nose at, then go ahead and push for rules that prevent that type of occurrence. This is not the first time this type of thing has happened (I seem to recall Libya chairing a UN group dealing with human rights a few years aback), so let's go solve it. Baby. Bathwater. Throw out. Bad.

Meanwhile, the Joongang Daily is reporting on the AP bureau opening in Pyongyang, which I consider a major story even though it has gotten very little coverage elsewhere. 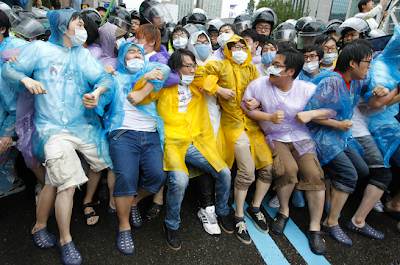