Riding in a black and white
(or silver and gray)

I'd been meaning to post on this for a while, this oft-repeated notion (see here, here, here, and here) that in Korea almost all the colors are black, white, silver, and gray, but since The Korean brought it up after his recent trip to South Korea, I thought I'd do a quickie post with a picture. 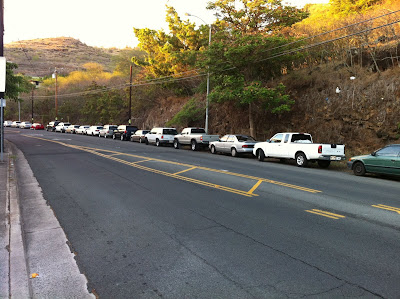 You see, while I agree that that is an apt description of cars in Korea, the thing is that it appears — from where I am at least — to be a more universal phenomenon. The above picture is in Honolulu, and it's not of a location I picked because there happen to be a lot of white, black, gray, or silver cars, but rather a location I had pre-decided before arrival to take a sample picture of, simply because I can get a lot of cars in the frame. (My vehicle is seventh counting from right.)

The picture below is in the other direction, the parking lot right behind me. 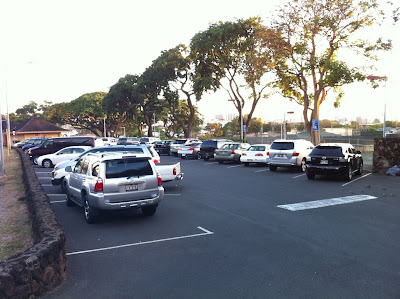 Note that in the first picture there are seventeen cars, and only three are some other color. And one of those is beige! The second picture is pretty much the same. Where I am at this moment in Orange County, I'd get almost the same results.

And if I'm right (and I always am), then this may be a case where we don't notice something that's around us until we encounter it outside our usual sphere. In this case, The Korean (from New York) when he's back in Korea, or all the bloggers and commenters who had written about it in the K-blogosphere. I myself didn't recognize it about Honolulu until someone started mentioning it about Seoul. (I think the phenomenon is also at play with racism and discrimination, sexism in various forms, work-related issues, etc., but that's a post for another time.)

The reason for this "problem," methinks, is that car manufacturers are trying to save money in the supply chain by providing fewer colors, particularly those that seem to be more popular. Every car I've owned, in fact, has been black (my current Honda Passport and the company Kia Carnival), white (my older Hyundai Sonata), or silver (my Acura Integra and my Hyundai Excel). I did once have a red Honda motor scooter.

Anybody else have a theory? Is it better resale value? I do see some color on Korean roads, especially if a certain smaller car looks especially cute (the green Matiz or the red Kia Pride come to mind), but otherwise it's that monochrome color pallet (there's an oxymoron for you).

UPDATE:
I decided to do actual homework for this. According to this site, nearly two of every three vehicles in North America are white, black, silver, or gray (Dupont had similar numbers). globally, those colors make up more than three-fourths of all cars. Meanwhile, unusual colors are less likely to be stolen.


This reinforced my belief that people might be going toward bland colors for some other practical reason, like theft, resale value, or getting ticketed. While I chose black vehicles because I think SUVs and minivans look cooler when they're the same color as the window tint, others might choose other inconspicuous colors so they won't gain notice from the fuzz.

Indeed, according to Snopes, drivers of white and silver cars get disproportionately fewer tickets than their population would suggest, but drivers of gray cars get more. Also, drivers of red cars are no more likely to get ticketed than those of other vehicles, so maybe I'll go that way next time.