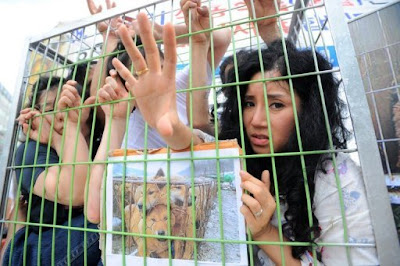 In the wake of news that a dog meat festival in Seoul was canceled thanks to the efforts of animal rights activists (above), CNN has a Global Post article on the state of dog meat in East Asia. And while the article tries to helpfully present the issue, it underscores one of the major problems in discussing the topic.

Setting aside the merits of eating dog meat or eschewing it (which you can talk about to your heart's content at this go-to Ask a Korean! post or in this Monster Island post), the CNN article is quite a geographically muddled presentation of this highly contentious issue.


The article is purportedly about South Korea, but the picture of the abused (and finally rescued) dog CNN put up at the top of the page (above this paragraph, with original caption) is in China. Naturally, some casual readers will conflate the dog meat industry in South Korea with the abuse in China depicted in the photograph (I dare say some readers might actually think Korea is a part of China or closely tied with it).

[Please note that I'm not saying abuse of canine livestock does not occur in Korea, as I've pointed it out here and here, but judging from these pictures it appears the abuse may be different: in Korea one major type of abuse are the cramped conditions in which many are transported to market, but in China, judging from the coat of the dogs in the picture, it appears some of these animals are not well tended even when they're being raised.]

And then at the end of the article we are told we can read more on this issue at GlobalPost's Dog Meat Mafia series, which "delves into the seedy world of the booming dog meat industry in Southeast Asia" (italic emphasis mine). Again, it would seem that South Korea's meat industry has something to do with the "seedy world" of the dog meat industry in Southeast Asia. Heck, M*A*S*H itself had its characters (who you may recall were in South Korea) referring to where they were as "Southeast Asia" in early seasons, even though they are thousands of miles apart, so why not casual CNN readers?

And to top it off, a hotlink in the middle of the article abruptly invites readers to "Read North Korean propaganda," as if North Korea is somehow connected to this (indeed, one commenter jumped on the North-South connection to suggest that because Koreans eat people, it's okay to eat Koreans elsewhere). Sadly, this mistaken conflation is nothing new.

The CNN piece was just sloppy journalism. Consumption of dog meat is an emotional issue for many people, both those who are opposed to it and those who defend it. Even though dog meat is consumed in China and a number of other countries throughout Asia, the stilted way it gets discussed in global media has been twisted into a stereotype about Korea that makes it seem like a uniquely Korean issue, and the worst aspects of the industry in other countries are sometimes placed squarely on the shoulders of Korea (and its national image).

And from there it sometimes crosses from an issue of national pride to one that affects people's pocketbook. When you have emotional opponents of dog meat consumption saying they will boycott LG, Samsung, or Hyundai because of the practice, that distortion gets to be a problem, especially if they're still buying Made-in-China (Apple, Dell, just about anything in WalMart, etc.) with hypocritical glee.

Somewhere in China, in cramped dorm rooms from Dalian to Guangzhou, Chinese netizens are starting to hammer out on their keyboards that, "Now the damned Koreans are stealing our dog meat industry!"