It was, apparently, somebody's idea of a sick joke: hacking into a Fox News's political Twitter account and offering up three fake tweets. One was an announcement that the president had been shot to death and another offered condolences to the nation. 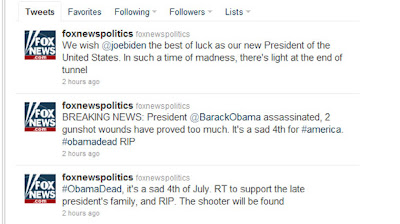 Freaky stuff. The Secret Service is none too amused by it, and is already investigating.

Needless to say, Fox News is bewildered and angry:


In a statement on its website, Fox News called the tweets "malicious" and "false."

"We will be requesting a detailed investigation from Twitter about how this occurred and measures to prevent future unauthorized access into FoxNews.com accounts," said Jeff Misenti, vice president and general manager of Fox News Digital.

As someone who's endured the unfortunate experience of having their email account hacked into (apparently by a vicious person in the K-blogopshere who has a personal vendetta against me going back to the 1990s), all I can say is, "that sucks." I guess this is as good a time as any to link to this Los Angeles Times piece talking about the best way to choose a good password.