Courtesy of the Washington Post, AP has a good overview of the three bids for the 2018 Winter Olympiad, along with pros and cons. I had planned to fisk it (just a little), but there's really nothing there I disagree with, except possibly the DMZ scare. I think the overwhelming support for the Olympics, both locally and nationally, will play in Pyongchang's favor, along with the potential to promote winter sports in an area where it's just now starting to gain popularity, plus the whole touchy-feely peace thing.

If Pyongchang narrowly loses a third time, though, we'll be faced with the tough decision of whether to try a fourth time or let Muju have a go at it. But let me tell you, if "Pyeongchang" wins, I'll be launching my "drop the E" campaign to bring back the superior variant of McCune-Reischauer Romanization that was in use during the last Olympics, before Retrograde Romanization took hold for the World Cup.

Oh, and "Boo!" to Frank Smith of PressTV for this highly skewed presentation of the tensions on the Korean Peninsula. 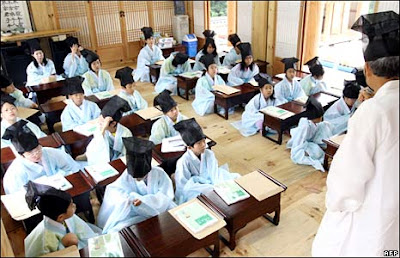