Brian in Chŏllanam-do reports, with some criticism, about a PC-bang in Sunch'ŏn (Suncheon) named "Challenger," with the picture making it clear that its namesake is the American space shuttle that blew up in January 1986, killing all aboard. One of his commenters calls it "epic fail." 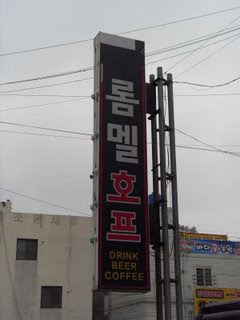 After similar criticism recently about a Rommel Hof (German-style beer house) in Mokpo, I'm beginning to think that some folks are starting to sound like the thought police.

If some Korean decides to name his "German-style bar" (which is what Koreans think of a "hof" as) after a famous and respected German military officer, he's bashed for praising "an infamous Nazi SS officer" and his business establishment "added... to the list of Nazi-themed establishments in Korea." Even though he was not a Nazi, an SS officer, or infamous (except in the minds of people who knee-jerkedly associate him with Nazis).

Now, when some other business owner takes a well-known American symbol, something positive, associated with high-tech, and even uplifting (in that he or she is honoring fallen heroes), he/she is derided ("epic fail"?) because that symbol met a fiery end? 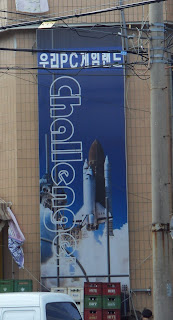 I have to ask: What are the rules for what names people can choose to use for their establishments? Because I'm a native English speaker and I certainly can't figure them out. Rommel is not Hitler, and the Challenger is not the... just what the heck is wrong with Challenger?

Is anything involving a dead famous person out? Should we go tell all the places named Columbia Language Institute to pick something else, and put the Discovery chain on notice that if — God forbid! — that spaceship should go the way of the Challenger and the Columbia then we're going to picket them?
Is Alamo Rent-a-Car somehow an "epic fail" for their choice of names? What if a Korean businessman or woman, fond of his/her time in New York, were to honor fallen Americans by naming their hamburger shop in Suwon "WTC," then should they be hounded?
Really, what are the rules and where do we draw the line? I'm definitely going to go pull this one out the next time someone in the K-blogosphere goes on about "overly sensitive Koreans."
I see this as interesting, not outrageous. And like Zonath at Marmot's Hole, I see it perhaps as a way of honoring the people who died.
Maybe folks down in South Chŏlla should start a consulting firm where you approve or reject any and all business names that are not originally in Korean. I suggest the name Minitrue. Such an enterprise could help you make an extra buck, though it would reduce the number of outrageous things for the blogosphere to comment on.
UPDATE:
Here's a link to a Time Asia story from 2000 on actual Nazi-themed bars in Seoul.
on April 05, 2009