Advent of the Korean shoebox eatery™ 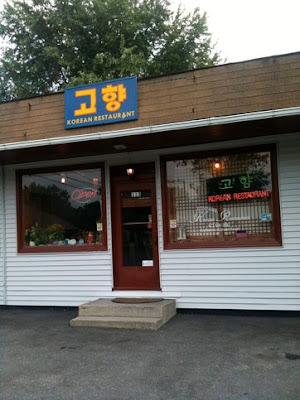 I've never been to Western Massachusetts, but the NYT's description of this restaurant caught my attention:


The Pioneer Valley, home to a whole mess of Western Massachusetts’s finest higher-education operations, is not a bad place to eat per se. But I know from friends who live or have lived there that the options can feel limited. So I was stoked, when passing through last week, to be taken to a restaurant that I hadn’t heard of and actually liked: Gohyang Korean Restaurant, a shoebox of a place on Route 9. There’s no reason why there shouldn’t, couldn’t or wouldn’t be a good Korean restaurant there, but I was quietly thrilled about it.

Gohyang is probably best known as “that Korean place in Hadley,” because the English-language signs one can read from the road identify it as “Korean Restaurant” and it is in Hadley, Mass. It’s housed in a smallish, bluish building with three doors: one for Gohyang’s Singing Rooms, a karaoke parlor; one for the restaurant; and one for Kim’s Oriental Mart, a place piled high with Korean kitchen supplies.

The last two Korean places I ate at in Orange County were a small but very tastefully decorated former Italian restaurant turned Korean and the Kogi Taco Truck, while the Korean places I frequent most in Honolulu are a shop at the end of an isolated strip mall near Ala Moana Center and a makeshift add-on in the Manoa Valley, so I'm liking the "shoebox eatery" description.

Not only is it a cool name, I think it's a cool concept. It doesn't take a lot of space to create a Korean restaurant, as any denizen of any Korean city will tell you. Of course, that doesn't mean you should skimp on the decor: If you hope to expand outside an AA clientele (and I don't mean AlAnon), you will need to make it look as if the place passes code with ease.

There. I've done my part for round 2 of the Korean Wave.