It was a spur of the moment thing (sorry, Wangkon), but my best friend's wife ("M3") said the Kogi Taco Truck was in the next town — we being in Anaheim and the Kogi Taco Truck being in Fullerton — so with their kid and dog in tow, we were going to get in the Expedition and track it down. Of course, from their part of Anaheim, "Fullerton" could mean it's 200 yards away, but it could also mean ten miles away, and it was closer to the latter.

As promised by their Twitter feed, they were at 303 N. Placenta Placentia Avenue in Fullerton, which is just on the other side of the Orange Freeway (the 57) from Cal State Fullerton. READ MORE...

[For you non-OCers, it's called the Orange Freeway because it originates in or heads to the City of Orange (depending on which way you're going), not because the freeway's color is in any way orange; that would be stupid. It does meet I-5 (the Santa Ana Freeway) and the 22 (the Garden Grove Freeway) at a massive spaghetti junction known as "the Orange Crush," which I think is clever... the name, not the Mongolian clusterfu¢k of a poorly engineered junction.]


We were expecting ninety-minute lines, which is why we had loaded up on chips and M3's homemade guacamole for fifteen minutes before heading out (and we brought along our own Cokes™ to avoid paying a buck-fifty for theirs). Turns out, there was no line at all, and the person taking the cash — cash only! — asked me for my order before I had a chance to even look through the menu. 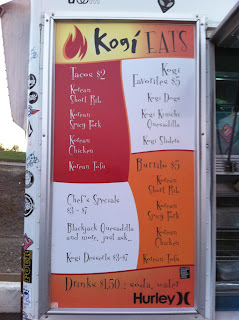 I had decided to try two types of meat by getting two types of $2 tacos, along with a $5 burrito that I'd give to my relatives when I met them the following day (if I didn't eat it first). The short rib sounded innocuously delicious, so I had that in the burrito and one of the tacos.

The word spicy in "spicy pork" had me wondering if this was standard maepta spicy or if they'd somehow made it super spicy for bragging rights or something (a culinary turnoff for me), so I asked the guy standing behind me with the cute girlfriend if he'd tried it before and how spicy was it. "Is it like sundubu spicy, or is it a lot hotter than that?" I asked (first in English, then in Korean), giving a reference point. "Oh, like sundubu, I guess."

So we waited for about five minutes or so and then they called our names and we got our food, half of which we ate right there in the parking lot. They do have foil and plastic bags for you to wrap up the food and take with you, which I did with the burrito, of course.


And it was good. Turns out the sundubu reference was apt: it was spicy for taste, not for pain. The spicy pork one is the reddish one on the left, but I think I preferred the short ribs one. The short ribs simply lends itself better to the mix with the Mexican tortilla (which is more Mexican style than Taco Bell style, at least as well as I can gather from occasional jaunts into Tecate, Tijuana, or Santa Ana). 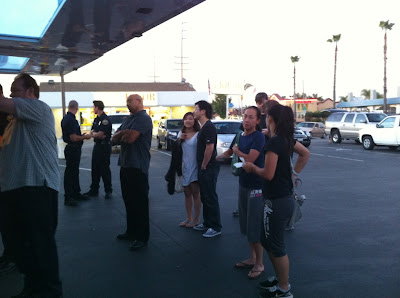 By the time we left, a crowd was starting to gather, including folks from an entire Orange County Fire Department truck parked illegally in the street in front of us. Mini M3 thought it was funny when I said the Fire Department came because they saw the fire-shaped logo, but he's nine; everything's funny to him. They gave him two junior firefighter stickers, one of which they told him to put on the truck (apparently you can stick things on their truck).

M3 had over-ordered, so I was getting quesadillas and another taco thrown my way. It was good. All of it. KoMex is not a bad idea, I'll tell you what, not just as a way to introduce Korean food to the unwashed masses of neophytes, but also to people used to it. The meat is a bit sweeter than standard taco meat, but that blends well.

And as M3 and I discussed on our way back to Anaheim, that accessibility seems to be what's driving its popularity. Sure, there is a measure of hype to the Kogi taco trucks (I heard about it from frequent articles in the Orange County Register that made it sound like ambrosial kalbi and bemoaned the fact that the sole Kogi Taco Truck at the time rarely made it down from Los Angeles), but they wouldn't attract so many people (they eventually had to get an OC-only truck they called Naranja, or orange, and then a second one called Rosita, or pink, I think) if they weren't good.

Good and accessible. Over at Daniel Gray's Seoul Eats and Joe MacPherson's Zen Kimchi they may have lengthy discussions on the merits of Korean fusion food, the bastardization adaptation of Korean food to attract a non-Korean audience, and the soft power that comes with promoting Korean food internationally, but here in the trenches first hand I see a lot of people eating Korean meat that would not likely step into a Korean restaurant unless they were dragged in or coaxed with promises of sex afterwards (by their eating partner, not the restaurant staff; I'm not trying to get anyone in trouble here).

I was talking with a sundubu restaurant owner in OC about how to use Yelp and other such sources to drum up more business, and we discussed the idea of a "chobo menu," a beginner's way of figuring out what's what so that it won't be so daunting. Stick it right outside so people walking in can figure it out and then not feel rushed when they go inside. I remember when phở (Vietnamese-style noodles) were first becoming big in Seoul, the main chain recognized that most of the people coming in were unfamiliar with their product, so they had something like "phở for beginners," "phở for the experienced," and "phở for experts." And now it's a hit (maybe because they wrote it as pho, not phở). Such a hit that at some point in the future, there may be loads of people in Korea who think that p'o (포) is originally a Korean food.

So that's my story. Posts like this are a lot more pleasant to write than the ones about North Korea threatening to blow up everything.