So, South Korea got a few mentions in Catherine Price's "101 Places NOT to See Before You Die," as told to PBS. Here's an excerpt:


While working on a project in Korea, Price had the opportunity to visit the DMZ. She expected it to be a "Berlin Wall-type thing" and was surprised to find "it's actually more of a sidewalk curb" with North Korea on one side and South Korea on the other with "soldiers on either side just staring at each other."

The tunnel is an organized tourist attraction — visitors are told to store their personal items in cubbies, don helmets and step onto a little train. Price says she was "lulled into complacency because it kind of seems like a Disneyland ride." But that didn't last long. "All of a sudden, with no explanation, they take you down into this narrow, claustrophobic tunnel blasted into solid rock."

Lest you mistakenly think the tunnel was designed with an invasion in mind ... think again! North Korea insists it's just a coalmine.

From what PBS reprints, it seems Ms Price is a boorish visitor who doesn't bother to read up on anything about the places she's going before she actually gets there, and she thinks that everyone else should be as amused by her resulting ignorant rants as she is. You can see the same professional malpractice at play when she does the Temple Stay in Kanghwa-do:


In theory, an overnight stay at a Korean temple sounds like the perfect activity for anyone struggling to escape the pressures of modern life. You'll meditate, you'll learn about Buddhism, you'll go vegetarian. Concerns and cares will slip away as you drift into a blissful state of conscious awareness.

I signed up for one of these sleepovers through a program called Templestay. Created in 2002 by the Jogye Order of Korean Buddhism — the largest Buddhist order in Korea — the Templestay program aims to allow visitors to "sample ordained lifestyle and experience the mental training and cultural experience of Korea's ancient Buddhist tradition." In other words, it's a chance to test-drive life as a monk.

The meditation center I visited, about two hours from Seoul on Ganghwa Island, seemed like the sort of place that could inspire calm. The grounds are nestled between rice paddies and a leafy forest, and the center's brightly painted temple sits several stone steps up from a gentle brook and a small pond stocked with lotus flowers and koi.

When my friend and I arrived — several hours late, thanks to trouble reading the bus schedule — the Templestay coordinator introduced herself in fluent English and led us to the room where we'd be staying. It was empty except for sleeping pads, blankets, and small pillows stuffed with plastic beads. After we'd dropped off our bags, she handed us our clothes for the weekend: two identical extra-large sets of baggy gray pants and vests, along with sun hats and blue plastic slippers. We looked like we'd stepped out of a propaganda poster for Maoist China.

I'd assumed that most temple life involved sitting still and cultivating enlightenment, but instead our first activity was community work time. Clad in our Mao suits, we followed the coordinator to the garden, where eight other Templestay guests squatted between raised rows of dirt, piles of potatoes scattered around them. They gave us hostile glances as we approached — thanks to our late arrival, they'd been forced to harvest potatoes for three hours in eighty-degree heat. I couldn't blame them for their animosity; if I'd been digging in the dirt while some assholes took the slow route to Ganghwa Island, I'd be pretty pissed off too.

I mean, did she really not know there was a tunnel at the DMZ Invasion Tunnel... and then mocked the whole tour because of her own ineptitude as a travel journalist? And is she actually knocking Buddhist monks for not living up to the navel-gazing caricature she imagined them as? 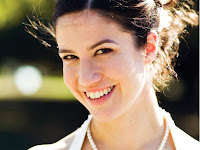 It's not like I'm coming to my dissatisfied opinion just because she dissed Korea. No, I'm equally bewildered by her smug bashing of the Blarney Stone in Ireland (kushibo may be some one-eighth Irish, hence the reddish hair of my early youth seen in my gravatar), which she instructs us is not worth visiting in part because of how unclean it would be to kiss it as so many prior visitors have. But this research-eschewing travel writer is later told, apparently after publication, by the Blarney Castle's employees that indeed, "you can actually request a special cleaning of the stone before you kiss it, if you would like." Imagine she'd done her homework, then she could have taken advantage of the eloquence an oral encounter which the stone bestows.

Ms Price's tome tops my list of 101 books you shouldn't read before you die*, while Ms Price herself is the reason why Asia should stop allowing tourists.

UPDATE:
Brian has written on this same topic, and a lively discussion follows.

UPDATE 2:
I would like to give PineForest a hat tip for the PBS piece. I most assuredly would have spotted it on my own in my regular news troll an hour or so later, but I did first notice it in his comment at The Marmot's Hole, wherever that was.

* I'm sure I'm not the first to come up with that one.