Good news for grave robbers and panda smugglers in China

They may no longer face execution in the People's Republic.


A committee of the National People's Congress this week opened discussions on eliminating the death penalty as punishment for 13 crimes, including the smuggling of silver and gold, receipt fraud, tax cheating and the theft of fossils. Grave robbery and rare-animal smuggling are also among the crimes being considered for lighter sentences.

Although Chinese law guards information about executions as state secrets, the country is widely believed to put to death thousands of people every year. Even at conservative estimates, the annual toll of Chinese executions is higher than that of the rest of the world's governments combined, Amnesty International reported this year. 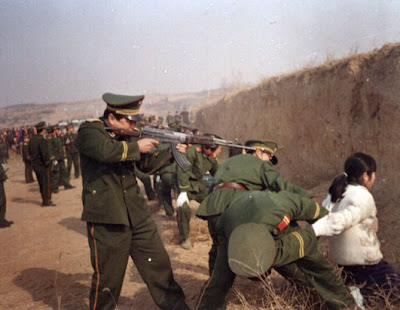 Personally, I'm a harsh critic of capital punishment (and hope South Korea's moratorium is made permanent, though I don't hold out hope for that during the Lee administration), but what riles me so much about the death penalty in China is that it is so often applied to crimes in which no one was killed. Things like embezzlement and the aforementioned offenses.

Email ThisBlogThis!Share to TwitterShare to FacebookShare to Pinterest
Labels: death penalty in Korea