That, says the BBC, is according to the Korea Alpine Federation:


Fresh doubt has been cast on the record of a Korean climber, who was hailed in April as the first woman to climb the world's 14 highest peaks.

If she decides to list the 2009 ascent as "unrecognised", the record will pass to Spanish climber Edurne Pasaban.

Ms Oh climbed Annapurna, the last of her 14 mountains above 8,000m, on 27 April. Ms Pasaban completed the list by scaling Shisha Pangma just under three weeks later, on 17 May.

Ms Oh responded to the Korean Alpine Federation's verdict - issued at a meeting of seven local climbers who have scaled the 8,586m mountain - by describing it as "a unilateral opinion".

I had earlier written about Oh Eunsun and suggested that her bid was being heavily scrutinized perhaps as a kind of "Hwang effect," but now as a Korean entity calls her achievement into question (à la MBC and Dr Hwang) it is looking even more and more like Hwang 2.0.

I wonder if anybody should be following the money.

At any rate, here's a neato graphic from the BBC about the fourteen peaks I will probably never ever get to the top of. 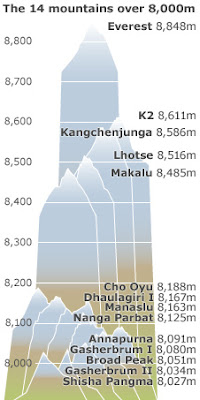