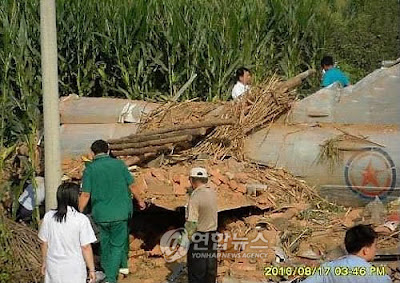 The BBC is reporting on what might be a highly unusual method of defection: A North Korean fighter pilot trying to make his way to Russia has apparently crashed in Manchuria's Liaoning Province:


A North Korean aircraft, which may be a fighter jet, has crashed in China near the country's shared border, say Chinese and South Korean reports.

It is believed the pilot, who was killed, may have been trying to defect to Russia, according to unnamed intelligence sources cited by Yonhap.

Defections are common but an attempt by plane is highly unusual and would be a source of embarrassment for Pyongyang.

Here's the Yonhap story, for which the above photo was taken.

Although China can be tight-lipped when it comes to news media, we can probably expect more straightforward reporting on this than if the plane had crashed on the North Korean side of the Yalu River. It will be interesting to see who was on board. Was it just one person? How high-ranking was the pilot and/or passengers? Is this a harbinger of things to come?

For that matter, how did it crash? Are North Korean jets so shoddily maintained at this point that they can barely get out of the country? Did the Chinese themselves shoot it down? Or the North Koreans?