Is there an Exxon-Valdez on the other side of the Yellow Sea? 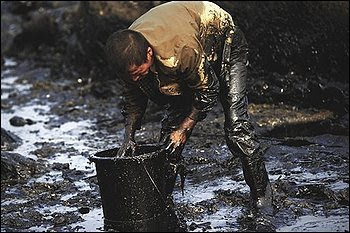 A former University of Alaska expert on marine conservation is warning that China's recent oil spill in the coastal city of Dalian, which is only a hop across the Yellow Sea from the fishing grounds and coastal areas of the Korean Peninsula, may actual be dozens of times larger than China is letting on.


China's government has said 1,500 tons (461,790 gallons) of oil spilled after a pipeline exploded two weeks ago near the northeastern city of Dalian, sending 100-foot- (30-meter-) high flames raging for hours near one of the country's key strategic oil reserves. Such public estimates stopped within a few days of the spill.

"It's enormous. That's at least as large as the official estimate of the Exxon Valdez disaster" in Alaska, he told The Associated Press. The size of the offshore area affected by the spill is likely more than 400 square miles (1,000 square kilometers), he added.

That's a thousand square kilometers in a shallow sea (an average depth of 44 meters and a maximum depth of 152 meters) that itself is only 338,000 km in size. Who knows if that slick will eventually hit the South Korean EEZ with its important fishing grounds? If North Korean landmines in wooden cases can get washed out to the Yellow Sea and then float to South Korean islands, why not tar balls?


Though Dr Steiner is obviously an activist working with Greenpeace and has been a vocal critic of BP for progressive institutions, the foundation of his claims rings true:


Steiner said his estimates came from the fact the oil storage tank that was destroyed had a capacity of about 90,000 tons (27.70 million gallons) and reportedly had just been filled by the tanker.

He said his lower estimate of 60,000 tons (18.47 million gallons) came from the rate of oil recovery by thousands of fishing boats dispatched for the cleanup.

"They've already collected more oil than the official estimate of the spill size," he told The Associated Press.

He praised the makeshift cleanup efforts: "Very low-tech. The thing is that it worked."

But he said the thousands of cleanup workers face possible health concerns after being told to help out, receiving no protective gear and being coated in crude.

If it is even close to accurate, this report is disturbing and alarming, but wholly unsurprising. China has a history of strenuously trying to keep unpleasant things under wraps (including previous major environmental disasters), even when the deliberate failure to disclose important information to the public leads to health risks, injury, and even death.

China has already tried to remove the spotlight from this nasty incident, with the mayor of Dalian declaring victory over the oil spill. I guess they had a bunch of made-in-China "Mission Accomplished" banners left over, and they had to use them for something.