You'd think that if you found a group of people who actually want to hear a Joe Biden speech, you should let them sit through to the end.

But if you're Chinese officials and you're afraid that the Vice President of the United States might say something frank, candid, and a little bit biting about your country, maybe you don't want people in the room who buy the proverbial ink by the proverbial barrel.

Or maybe they were afraid Joltin' Joe was about to call his Chinese counterpart "articulate and bright and clean and a nice-looking guy."


Xi spoke first, calling Biden's visit a "major event" in the U.S.-China relationship and expressing his desire to work with America "to promote development of relations between our great nations."

Then Biden spoke, starting with a reference to his first visit to China in 1979, when he saw "the great wonders" of the nation. He spoke of his admiration for the Chinese people and the "great sweep of history." And to Xi, he spoke of the importance of developing a close personal relationship, one of "openness and candor," and stated his belief that foreign policy "is more than just formal visits, it's establishing relationships and trust."

"It is my fond hope that our personal relationship will continue to grow," Biden said to Xi, who is widely expected to be the next Chinese president.

It was right about this time that a near-brawl was breaking out about a hundred feet away from the diplomatic exchanges in the Eastern Hall of the Great Hall of the People.

Only minutes into Biden's remarks, Chinese officials had begun to direct reporters toward the exits. Most reporters and the vice president's staff objected, saying it was important to cover the entirety of Biden's opening statement, as had been the agreement between officials beforehand.

A Chinese press aide said Biden was going on far too long for their liking. But in fact, including the consecutive translation of his comments from English to Chinese, Biden spoke only two or three minutes longer than Xi had.

Soon the stern shooing turned into forceful shoving. As reporters tried to stand their ground, Chinese officials locked arms and pushed forward in a show of overwhelming force. Soon enough Biden did finish, but reporters had difficulty hearing the entire thing because of the fisticuffs.

This is one of the things that makes me so uneasy about China: it is a big and powerful country that tries so very, very hard to remove uncomfortable facts and discourse from the public sphere, often replacing it with its own pre-approved distraction or diversion.

From SARS to the treatment of Uighurs to Joe Biden potentially making a speech where he would call for more press freedom or human rights in North Korea, China's ally, Beijing has great fear over the public knowing what's really being said or done. As we've seen with SARS itself, it is an unsustainable situation that threatens to collapse in on itself. Sadly, though, my thoughts and opinions probably reach very few Chinese, as Blogger (this blog's platform) is still blocked in China, I believe.

Meanwhile, Biden is getting no love on the other side of the Pacific Ocean, either. At Real Clear Politics, Richard Benedetto makes the case that for jettisoning Joe in favor of Secretary of State Hillary Clinton:


In contrast, Biden flopped on the one high-profile task Obama gave him this year -- negotiate a budget-deficit deal with Democrats and Republicans in Congress. The Biden-led talks came to an abrupt end in June when Republicans walked out.

All this is not lost on the public. The Gallup Poll puts Clinton’s favorability with the American people at 66 percent. The last Gallup measure for Biden put him at 42 percent.

Moreover, with the growing possibility that a woman -- Rep. Michele Bachmann -- could be on the Republican ticket either in the first or second slot (more likely the latter), Clinton would provide a formidable counter that an all-male ticket would not. Democrats would love to pit Clinton’s political and experiential skills against those of Bachmann. It’s a matchup they believe they would win going away.

On top of all that, Clinton has a large, spirited and loyal following among Democrats and many independents. Biden does not. The vice president only brings Delaware and its three electoral votes to the fold. And Delaware is a heavily Democratic state that would probably vote for Obama whether Biden is on the ticket or not.

Clinton, however, could shore up flagging Obama support in critical swing states such as Pennsylvania, New Jersey, Ohio, Florida, Minnesota, Wisconsin and Iowa, states the president must carry to win a second term. Without them he’s a goner, and he knows it.

And I would like to see Clinton go up against Bachmann in a VP debate. We can see once and for all who pulls off the Crazy Eyes look better. 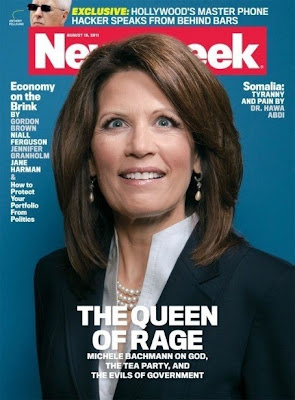 My, that was terrible. No national print media would ever do that to Hillary, would they? 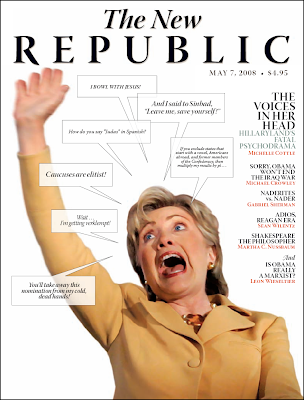 Oh, my. That's just horrible. It sure puts the latest engineered outrage over the Bachmann Newsweek "Queen of Rage" cover into perspective a bit. Of course, Bachmann's outraged supporters somehow missed this and many other depictions of Hillary Clinton as having crazy eyes herself, as they largely happened before the Republicans insist the world began, on January 20, 2009. 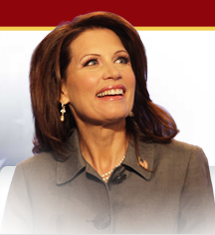 By the way, I'm not so sure how the above photo of Ms Bachmann is so dramatically different from this one at left, which I snagged directly from the Congresswoman's own Bachmann-for-President website.

(This post was brought to you by Stream of Consciousness™.)