I imagine most of my readers are familiar with the controversial Yasukuni Shrine. Originally meant to enshrine those who died fighting for the Japanese Emperor, turning them into kami gods, it became a source of contention and bad relations with Tokyo's neighbors when the shrine keepers chose to enshrine the fourteen Class-A war criminals who had been the architects of Imperial Japanese expansionism and brutality before and during World War II.

Adding fuel to the fire, the relatives of some of the Koreans and Taiwanese who were enshrined there after dying during service in the Imperial Japanese military have sought to have their loved ones removed (ditto with some Japanese family members).

The Yasukuni shrine keepers shrug their shoulders and say once a dead soldier has been made into a kami, there ain't nothing they can do about it. It's a bit of an angels-dancing-on-the-head-of-a-pin argument. 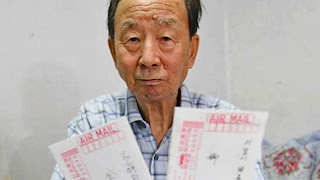 Well, speaking of pinheads, one Mr Kim is particularly ticked off about enshrinement at Yasukuni: He was never an Imperial soldier and, just as importantly, he's not dead.


For most of his life, Kim Hui-jong has kept what he considers a shameful secret. In 1944, as a teenager, he was abducted from his village in northern Korea by Japanese soldiers and forced to dig tunnels at a World War II military camp on the island of Saipan.

It would take him a decade of marriage to tell his wife about his past. Kim, 86, still often dreams of the battlefield shelling that severely damaged his hearing and the taunts of his captors: "You Koreans are like canned meat; we can take you anywhere and use you as we see fit."

He always considered his Japanese enslavement, and the two years he later spent as a U.S. prisoner of war, as a lifelong humiliation. Then, in 2005, Kim received a new insult he insists he still cannot bear: For decades, the former conscript learned, he has been counted among Japan's war dead and, because of an administrative error, his name is listed at Tokyo's controversial Yasukuni shrine. He could no longer remain silent.

Many view Yasukuni as a symbol of Japanese militarist values that led millions to their deaths. Worse, Kim and other critics say, Shinto priests who control the shrine list Japanese leaders executed as war criminals in its ranks of the dead.

Just so we're clear, it's not Mr Kim to whom I referred as a pinhead.

Anyway, expect the Yasukuni shrine keepers to do drag their feet on this, if they do anything at all. The modus operandi in dealing with embarrassingly bad things from World War II is to ignore it, especially if it sets a slippery-slope precedent. This is why, for example, Tokyo continues to insist Tokto is Japan's, not South Korea's, because to do anything else would seem to weaken Japan's claim to islands disputed with Russia, China, Taiwan, etc.

Email ThisBlogThis!Share to TwitterShare to FacebookShare to Pinterest
Labels: looking back on Imperial Japan, Yasukuni